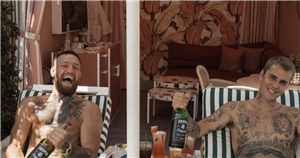 Conor McGregor was out-and-about in California on Friday, hanging out by the pool with pop star Justin Bieber.

The Irishman took to Instagram to share a series of pictures showing him and Bieber relaxing at a plush Beverley Hills pool club, congratulating his music star pal on his recent successes.

Bieber and McGregor have been friends for a number of years, with the Irishman making a note to thank the singer for a message ahead of his trilogy with Dustin Poirier earlier this month.

The former UFC two-weight world champion joked about his injury, saying on his Instagram page: "JB and Big Foot, we rule Beverly Hills!

"God bless my brother! Backed by the highest power!

"Huge congrats on your Balenciaga campaign and your Drew House [clothing company]! Can’t wait to get to the show tomorrow!

The pair had some whiskey cocktails made with the Irishman's famous Proper 12 brand, and Bieber responded saying that it was the "breakfast of champions."

He added, in relation to the Poirier trilogy; “its about how you get back up”.

Earlier this month, McGregor thanked Justin Bieber for a message he sent after his loss to Dustin Poirier in their rematch earlier this year.

The Irishman was trying out Instagram Live for the first time when Bieber popped into the chat, which included hundreds of thousands of other viewers.

And he thanked him for a message he received from the singer in the wake of his second fight with Poirier at UFC 257, which he says 'meant a lot' to him.

" Justin Bieber! What's up, Justin Bieber? Love you brother," McGregor said when he realised the singer was watching his Instagram Live stream a week before his trilogy bout with Poirier.

Unfortunately, Bieber's support, which also saw him attend the fight at the T-Mobile Arena alongside celebrities like Logan Paul and president Donald Trump, wasn't enough to push McGregor to a win.

The Irishman exploded out of the traps against Poirier, landing a number of big kicks before pulling guillotine in an effort to finish the fight early, which allowed his rival top control.

And the fight was finished once the pair returned to the feet when McGregor threw a teep kick, which Poirier checked, and while stepping back, the Irishman snapped his leg in a gruesome injury that saw the fight stopped in the corner by a doctor.

The legendary former UFC champion had to undergo surgery after the bout, and after the operation was a success, he promised to return to the cage, with his comeback date likely to take place in the second half of 2022.

"Whats up fight fans, the Notorious here," McGregor said in a Twitter video immediately after his operation.

"We got six weeks on a crutch now and then we begin to build back. I want to say thank you all the fans around the world for the messages of support, I hope you all enjoyed the show."