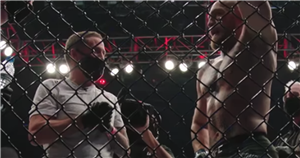 Conor McGregor's coach told him he was doing "great" just before he was knocked out by Dustin Poirier.

McGregor and Poirier met for a second time in January with the Irishman succumbing to a second-round stoppage defeat.

But all three judges had awarded McGregor the opening session, despite Poirier having success with his calf kicks.

And lead coach John Kavanagh told his charge between rounds: "Great round, great round. Keep doing what you're doing… lead hand in."

But a little over two minutes later, McGregor was dropped and stopped by Poirier as the American celebrated exacting his revenge for his own defeat seven years earlier.

The rivals will meet again this weekend to settle their trilogy and to likely determined the next lightweight title contender.

McGregor was clearly debilitated by Poirier's calf kicks and later admitted his training had been too boxing-focused.

The Dubliner had been pursuing a blockbuster clash with ring legend Manny Pacquiao but saw those hopes extinguished by Poirier.

In the immediate aftermath of his third UFC defeat, McGregor admitted he would have to change tactics – and Poirier agreed that he expects a different fight.

"I don't think you ever really [have someone's number]," he told Joe Rogan earlier this year. "He'll make adjustments. It'll be a completely different fight.

"Like the first one and the second was different, the third one's going to be different as well. I'm going to make adjustments as well. I've got to switch it up and keep things fresh and keep him guessing."

McGregor has kept much of his training camp private having started out in Dubai before switching to California.

He will make the short trip to Las Vegas on Wednesday to complete his media obligations and weigh in on Friday.

But he did reveal during an Instagram Live session that he intends to bring a number of 'weapons' to the table as he bids to beat Poirier and secure a title shot against lightweight champion Charles Oliveira.

“(I’m going to) give him a proper head kick,” McGregor said. “There will be a lot of weapons produced on the night, that’s for sure. He wants mixed martial arts? He’s going to get it.

July 5, 2021 MMA Comments Off on Footage emerges of advice given to Conor McGregor just before Dustin Poirier KO
NFL News