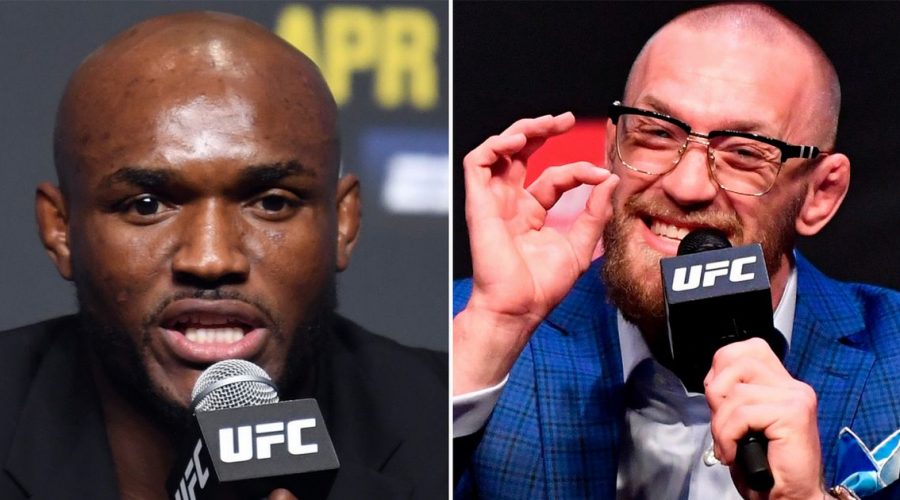 Usman and McGregor have previously entertained the possibility of a fight, although lately that appears to have cooled with the Nigerian fighter more interested in taking on legitimate contenders in the division like Leon Edwards and Colby Covington.

But fans have noticed that while Usman, who is managed by McGregor's fierce rival Ali Abdelaziz, may not be the biggest fan of McGregor's, some of his trash talk is remarkably similar to the Irishman.

A video posted by a fan account showing the similarities in phrasing was noticed by the former two-weight world champion, who posted a crying laughing emoji in response to the damning video.

One example showed McGregor on the mic after his win over Donald 'Cowboy' Cerrone at UFC 246 proclaiming that 'any one of these mouthy fools can get it," followed by a post-fight interview from Usman's fight with Gilbert Burns saying essentially the same thing.

And another saw the number five ranked lightweight contender saying that he feels Dustin Poirier is "a great fighter", but still "levels below" him before their rematch earlier this year.

Usman can then be seen saying the exact same thing about Jorge Masvidal ahead of one of their two bouts over the last year.

The next clip shows McGregor, having just beaten Eddie Alvarez in 2016 for the UFC lightweight title to become the first ever simultaneous two-weight world champion, imploring contenders to show him 'activity'.

And immediately following his win over Jorge Masvidal in April, Usman made the exact same request of the likes of Covington and Edwards to earn a title fight.

Finally Usman can be seen asking Masvidal if he can "even read" at a press conference, which is a throwback to McGregor's infamous Toronto meeting with Floyd Mayweather.

The current welterweight king has recently spoken on McGregor, showing pity for the former champion, despite his status as richest athlete in the world.

"My daddy used to always say, 'Everybody loves the chair, but while they're chairing they can't make the move,'" Usman said during an appearance on the True Geordie Podcast .

"I can't imagine what Conor's going through, that's got to be hard because you can't do anything – people can't wait to move because now people are just waiting to rub it in your face."

Many fighters have called McGregor out over the years, including current lightweight champion Charles Oliveira, but Usman doesn't appear to have much interest in offering him a chance at a third belt.