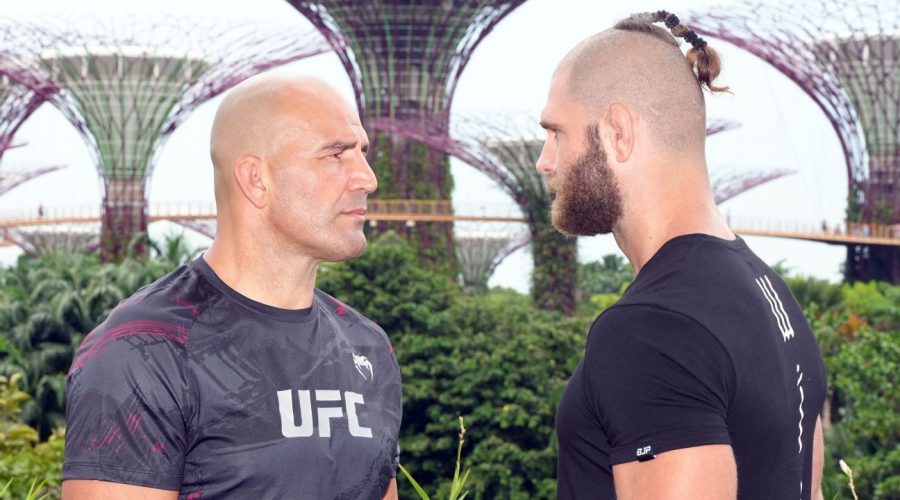 Two former strawweight champions, Zhang Weili and Joanna Jedrzejczyk, meet in a rematch of the 2020 fight of the year, a relentless back-and-forth that was one of the greatest fights in UFC history.

And that’s not the main event. It’s not even the co-main.

The headliner of Saturday’s pay-per-view event in Singapore is a light heavyweight title bout between Glover Teixeira, the 42-year-old new champion, and challenger Jiri Prochazka. And the co-main event is also a title bout, in which perhaps the most dominant champ in the UFC, flyweight Valentina Shevchenko, defends against 19-1 Taila Santos.

Teixeira (33-7) is defending the title he won in October with a submission of Jan Blachowicz, making him the oldest first-time champ in UFC history. Teixeira is No. 8 in the ESPN men’s pound-for-pound rankings.

Prochazka (28-3-1), who is No. 4 in ESPN’s light heavyweight rankings, has won 12 fights in a row, most recently a second-round KO of Dominick Reyes in May 2021. It was just the second UFC fight for the former Rizin champ.

What are the storylines behind Saturday’s fights? How are experts breaking them down? What do the fighters have to say? Here is the fight card, how to watch it, and a collection of all of the UFC 275 essentials.

How to watch the fights

Watch the PPV and all other fights on ESPN+: Get ESPN+ here.

Purchased the fight on your phone and want to stream on your TV? Find out how here.

The marquee for UFC 275 features two title fights. One pits a solid, resilient champion against a creative force on an irresistible rise, and the other showcases perhaps the most dominant champ in mixed martial arts. And just before those showstoppers for gold is a highly anticipated rematch of the 2020 fight of the year.

Beyond that? There aren’t a lot of recognizable names in the rest of the lineup for Saturday in Singapore, making it tempting to belittle this as a three-card card. But the savvy among us know better. You can never discount the possibility that a pair of “who are they?” fighters will be the ones providing the weekend’s viral KO or breathtaking throwdown.

Here’s a ranking of the top fights at UFC 275, from the obvious to the obscure.

Is your favorite UFC champion at risk of dropping their title this summer?

The ageless wonder Glover Teixeira will be defending his belt against the very dangerous and unpredictable Jiri Prochazka at UFC 275. Out of all the title fights this summer, this fight is the most unfavorable for the champion.

Don’t get me wrong, Teixeira has shown time and time again that he has incredible heart and doesn’t back down from a challenge, but if he can’t get the fight to the floor, he will be in a world of trouble. Teixeira is a good striker, but Prochazka is on a different level. In many of his fights, we’ve seen Teixeira get dropped and then have to come back to win. I am not so confident that if he gets dropped by Prochazka that he will be able to recover.

Predicting that Jiri Prochazka will bve light heavyweight champ by year’s end is by no means an effort to diminish the accomplishment of Glover Teixeira, who at age 42 choked out Jan Blachowicz in October to become 205-pound champion — nearly seven years after falling short in his first crack at UFC gold. Teixeira is as tough as they come in MMA, and his well-rounded skill set poses danger to opponents no matter where a fight takes place.

But Prochazka is special. He showed in his May fight with Dominick Reyes — and especially in the spinning back elbow that ended it — that he is the most inventive fighter that elite MMA has seen in years. Don’t be fooled by him being a new face on the scene with just two UFC appearances under his belt. The 29-year-old Czech has been a pro for a decade and was a champion in the Japanese promotion Rizin with some notable victories.

The UFC light heavyweight champion told Globo’s Mundo de Luta podcast that he would like to wrap up his illustrious career in the next few months and this would “probably” be his final year fighting. Teixeira, 42, will defend his light heavyweight title in the main event of UFC 275 on June 11 in Singapore against Jiri Prochazka.

“I’ll be 43 in November,” Teixeira said, as translated by MMA Fighting. “Regardless of being at the top, being the best of the world or not, I want to stop this year. It will probably be my last year. I don’t want to make this decision after a fight, but it’s what I’ve been thinking for a while.”

For all of his accomplishments in the sport, it seems Glover Teixeira gets credit mainly for his durability and longevity. That’s not wrong. He won the UFC light heavyweight title last year — more than seven years after his first title challenge against Jon Jones in 2014. The Brazilian has been finished only twice since his 2002 pro debut, a span of 39 fights. But not only does Teixeira rarely get finished, but he also does plenty of finishing of his own. And his nose for finding submissions has been excellent of late.

“I’m like, oh my god, it’s three days before the New Year and I don’t have a dress,” Shevchenko recalled to ESPN two weeks before her title defense against Taila Santos at UFC 275.

Much like Cinderella’s fairy godmother, Aysalkyn Ismailova met Shevchenko at the last minute to take her measurements. She told Shevchenko she would get the dress done even if she didn’t sleep. The next day she presented the champion with a beautiful dress for the party.

“The best thing about being at home in Kyrgyzstan is that there’s so many talented people around you,” Shevchenko said. “It’s about real desire and love for your work. They want to be the best at their jobs and create happiness for their customers.”

Valentina Shevchenko was inside of a boxing gym in Newark, New Jersey, preparing to go on a run. It was the fall of 2019, and the next day Shevchenko would start filming an MMA movie alongside A-list star Halle Berry.

To prepare for the shoot, Shevchenko was cutting weight, and the run was to sweat out some extra pounds. The UFC women’s flyweight champion wanted to appear at her physical best for the fight scenes. She put on her sauna suit and was about to start the run when Berry unexpectedly entered the gym.

The Academy Award-winning actress had the same idea.

“I started to do my workout and then I saw Halle,” Shevchenko told ESPN with a laugh. “She was walking into the gym, the same — in the sauna suit.”

June 11, 2022 MMA Comments Off on Everything you need to know about UFC 275, Glover Teixeira vs. Jiri Prochazka
NFL News