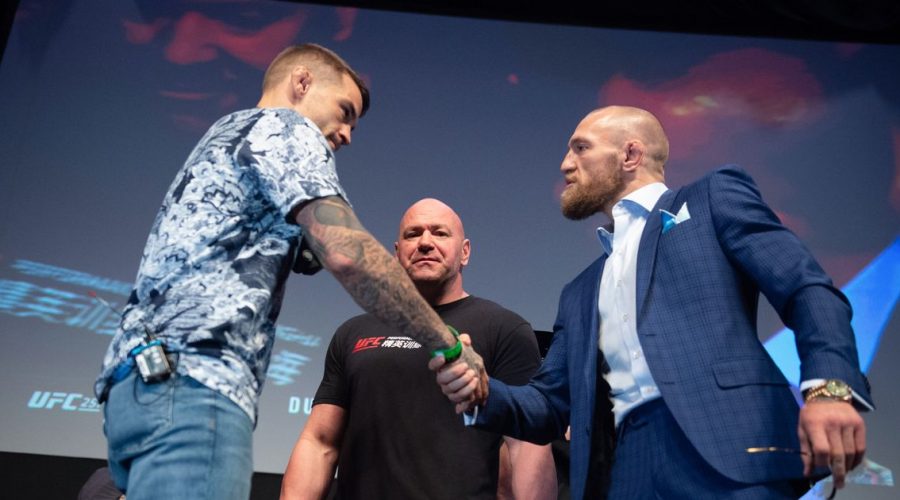 Conor McGregor has been told that he needs to revert back to his trash-talking best ahead of his trilogy with Dustin Poirier.

The former two-weight world champion took a friendlier approach to Poirier ahead of their second fight, having wound the American up in the build-up to their first meeting.

And legendary UFC trash-talker Chael Sonnen believes that reverting back to his earlier moniker will affect McGregor's performance as much as it will Poirier's.

Speaking on his podcast 'Beyond the Fight', Sonnen explained how he learning to talk himself up benefited his performance in the cage.

"I was given this advice when I was a kid," Sonnen said. "One of my coaches told me to write on my mirror every day that I was the champion.

"I would have felt silly, what if somebody saw? I didn't believe it.

"I only bring that to you because later in my life when I started to do it, I did believe it, and I believe that Conor McGregor went through the same thing.

"When everybody thought he was out there being an entertainer or trying to get in Jose Aldo's head, I don't believe that's what was motivating.

"I believe that Conor was like me, where he started to make these claims and how saying these things out loud effected him inside and also how it effected his training and his discipline and work ethic.

Sonnen, an influential voice in the world of combat sports who fought for the UFC world title three times, believes that McGregor was able to overcome a series of obstacles due to his mentality.

"Conor McGregor is a guy from Ireland with a damn good left hand, so what?" Sonnen continued.

"He's got not business stopping Chad Mendes' takedowns or scrambling and getting up from the bottom when Chad is on top of him, but he did it.

"He's got no business being in there with Floyd Mayweather in a sport he's never done before and Floyd has never lost at, but he did it and he did it very well.

"That's one of the sides to the positive talk that when Conor started the PR tour and he quit doing those things, he quit being brash, it wasn't just a letdown for us fans that enjoyed that commodity that he brings to the table, the entertainment.

"He stopped putting that pressure on himself and I'm not sure that Conor understands that was the difference in the second Poirier fight, it was the approach.

"He got into that ring as though he was above Poirier and I'm sure he felt that way; he'd already dusted Poirier, it wasn't a close contest and at no point during that fight was he ever in trouble and it was a pretty short night.

"But it was a meaningful difference whether Conor is aware of it or not, saying those things isn't just good for ticket sales or making your opponent second guess themselves.

"Saying those things is what gets you ready to go out and act on it, and I'll be very curious what Conor's approach is."