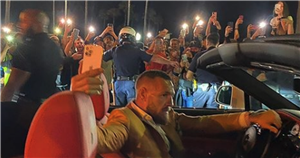 Conor McGregor was mobbed by fans after word got out that he was dining at a California restaurant with members of his team ahead of UFC 264.

The Irishman took his team out last night for what was supposed to be a quiet meal to celebrate the end of their intensive fight camp for his trilogy with Dustin Poirier.

But once fans noticed that he was in the area, a crowd estimated to be over 1,000 flocked to the restaurant to catch a glimpse of the world's richest athlete.

McGregor shared a video on his Instagram account, which shows a crowd of hundreds of fans going crazy as he leaves the plush restaurant.

The Irishman appeared to be completely stunned by the turnout, and can be heard saying "Jesus Christ, look at this," before starting to shadow box as the crowd, who were held back by police, cheer before he hops into a white convertible car.

But the Dubliner struggles to get out of the car park due to the volume of people surrounding his car as he says: "I think I'm stuck."

Eventually McGregor is able to leave the car park but he is chased down the road by a number of fans before he is eventually directed home on radio.

And his coach John Kavanagh explained the experience after the meal, saying on Twitter : "Quiet end-of-camp team meal… Turns into streets shut down when word got around. Nuts haha."

The Irishman is in America preparing for his trilogy fight with Dustin Poirier, which takes place next Saturday night at the T-Mobile Arena in Las Vegas.

He's been working with long-time coaches John Kavanagh and Owen Roddy from SBG Ireland, and was recently joined by teammate James Gallagher in his Californian training camp.

He has also been working with top Bellator lightweight Peter Queally, who was a staple of many of his training camps on his road to his two world titles.

McGregor's intensive training schedule reportedly includes a 20-mile round-trip on the bike to his gym every day for single sessions.

"Training is going good," he told a fan. "There are just about three more days of work and then I'll just taper it in, although I've been doing single sessions the last week or so.

"I've halved the work I'm doing the last week or so, I suppose the body is getting ready now but I'm still sparring, grappling heavy, doing tough training.

"I suppose the cycle in has been almost like a second session as well, I've almost been getting three sessions a day to be honest.

"I've been waking up cycling to the gym, getting my training in, then going home from the gym, that's essentially three sessions a day I've been doing."

He will earn a shot at the lightweight title, currently held by Charles Oliveira, if he beats No.1-ranked Poirier in their third fight next weekend.

July 4, 2021 MMA Comments Off on Conor McGregor mobbed by fans after word gets out about team dinner
NFL News