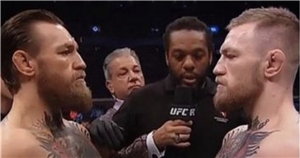 Conor McGregor has suggested he is in the shape of his life, claiming he would “absolutely demolish” the fighter that has stepped into the Octagon in recent years.

The Irishman is set to enter the cage for the first time in over a year, when he fights Dustin Poirier at UFC 257 later this month.

It’s the second time McGregor has faced off against Poirier, after knocking out the American in the first round back in 2014.

Since then, the Notorious has gone on to become a two-weight world champion, as well as crossing disciplines in a defeat to Floyd Mayweather Jr in the boxing ring.

Poirier meanwhile has lost just twice since the first fight, including his only title bout against Khabib Nurmagomedov in 2019.

But despite being out of action for 12 months, McGregor believes he is a more dangerous man than has stepped in the ring in recent years.

Posting on Instagram, the 32-year-old said: “Cerrone McGregor Vs Alvarez McGregor. I’d destroy both these versions of myself. And Together. And I’m not messing.

"Absolutely demolish them both. 16 days!”

Those two fights both went the way of McGregor, knocking out Donals Cerrone in just 40 seconds last year, while it was a second-round TKO win over Eddie Alavarez in 2016.

Poirier meanwhile, knows that he must avenge his defeat if he is to stand a chance of another shot at the 155lb belt, but has insisted revenge isn't part of his motivation.

"This isn't about payback; this isn't a revenge fight for me,” he said.

"Of course those things are great. I go out there and beat him, those are all part of this storyline, [they’re] things I’m going to think about and be happy with, but that’s not the driving force of each day.

"I’m driven by the main goal: becoming the world champion, being the best. I know that a win over a guy like this, at this point of our careers, it etches my name in the history books – on its own page.

"I’m in the books. I’m in the honorable mentions right now. I’m trying get my own numbered page. I think a win over this guy does that and cements me as a legitimate combat sports professional in a time that’s full of great athletes: Conor, Khabib.”

January 8, 2021 MMA Comments Off on Conor McGregor claims he would "demolish" previous versions of himself
NFL News