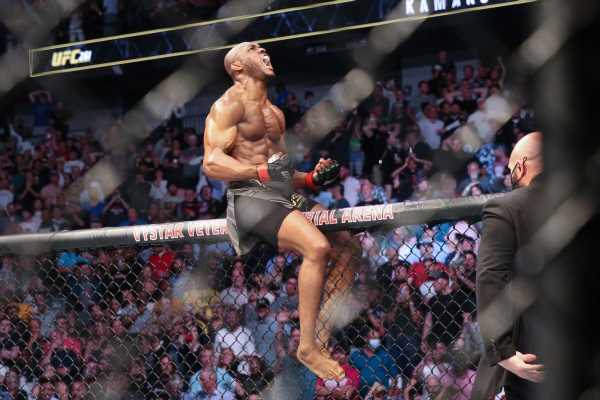 Conor McGregor has called out Kamaru Usman after the Nigerian knocked Jorge Masvidal out cold to retain his UFC welterweight belt at UFC 261 in Jacksonville, Florida on Saturday.

Famed for his powerful wrestling, 33-year old Usman came into the main event on Masvidal’s home turf on a 17-fight winning streak, and he won the first round comfortably before bringing the fight to a sudden halt in the second.

Usman uncorked a thunderous right hand a minute into the second frame to deck Masvidal, who looked out before he hit the canvas, silencing the boisterous home crowd and extending the longest winning streak among active fighters in the UFC.

“Been a while since I’ve been extremely nervous for a fight. But he elevated me. He made me go to the workshop and sharpen all my tools to put on a performance like that,” Usman said in his post-fight interview, his daughter in his arms in the octagon.

“I am the pound-for-pound best fighter on the planet right now,” he added.

McGregor, who next faces Dustin Poirier in their trilogy bout in July, tweeted his challenge to Usman soon after the fight.

“Usman even copying my shots now,” McGregory said, accompanying a video of his own boxing skills. “Am I to fight this guy at some stage? I think so. Can’t be copying my words and my shots and not get a smack for it. I like 170. It’s mine soon.”

McGregor, a former lightweight and featherweight champion, has three previous fights at welterweight, with a defeat and win against Nate Diaz, and a win over Donald Cerrone – his most recent UFC victory, in January 2020.

On a busy night, Rose Namajunas pulled off a stunning first-round head kick KO to dethrone strawweight champ Zhang Weili, while in the third title fight on the bill, women’s flyweight champion Valentina Shevchenko dominated Jessica Andrade as she coasted to a second-round technical knockout victory to retain her crown.

In the co-main event Namajunas, who won the title in 2017 and had one successful defence before losing it to Andrade in 2019, landed a left high kick flush to the jaw to put the lights out for Zhang after just a minute and 18 seconds of their title fight.

Namajunas dived in to finish off her opponent but referee Keith Petersen was quick to wave it off as the American snapped her opponent’s 21-fight winning streak and became the first woman in the UFC to reclaim a title.

April 25, 2021 MMA Comments Off on Conor McGregor calls out Kamaru Usman after his victory over Jorge Masvidal at UFC 261
NFL News