It has become a cult tune among Washington Nationals fans after outfielder Gerardo Parra selected it as his walk-on music at Nationals Park, and the capital’s team are making their ‘Fall Classic’ debut as unlikely National League champions after an impressive post-season.

They beat the Milwaukee Brewers in the Wild Card Game, upset the much-fancied Los Angeles Dodgers 3-2, and then swept the St Louis Cardinals aside 4-0.

Standing in the way of a first MLB title for the Nationals are the Houston Astros, who enjoyed the most successful regular season in their history – racking up 107 wins from their 162 games, the best record in baseball this year, before beating the Tampa Bay Rays 3-2 and overcoming the New York Yankees 4-2 to clinch the American League pennant.

The best-of-seven World Series begins in Houston on Tuesday night, with the Astros’ superior regular-season record earning them ‘home field advantage’ – four games at home if the series goes the distance.

Duel of the superstar pitchers

Gerrit Cole and Justin Verlander will take the mound for the Astros in those games, after dominating the 2019 campaign in which they were the only pitchers to earn 20 or more regular-season wins, and the only duo to top 300 strikeouts each.

Both will start two games of the World Series on regular rest, backed up by mid-season signing Zack Greinke – who would be a number one starter on most teams, but finds himself as Houston’s number three.

However, Washington’s starters will have had a full week’s rest after eliminating the Cardinals last Tuesday. Max Scherzer looks likely to face Cole in Game 1, with Stephen Strasburg against Verlander in Game 2.

Scherzer, a three-time winner of the Cy Young Award given to the best pitcher in each league, has only given up one run in 14 innings in this postseason. Strasburg, dubbed a “phenom” since being MLB’s number one draft pick in 2009, has won 18 regular season games and three post-season matches in 2019.

Patrick Corbin and Anibal Sanchez are likely to be Washington’s other starters. An interesting link between the teams is that Sanchez, Scherzer and Verlander were all World Series runners-up with the Detroit Tigers in 2012, while a possible Corbin-Greinke matchup in Game 3 would pit two former Arizona Diamondbacks team-mates against each other.

No longer the plucky underdog, the Astros are the favourites to recapture the title they won for the first time in 2017, weeks after the Houston area was devastated by Hurricane Harvey.

While some players from that success, such as pitchers Dallas Keuchel and Charlie Morton, have departed, the core of that 2017 side remains, notably second baseman Jose Altuve – the shortest player in the majors at 5ft 6ins but a consistent hitter.

A World Series tilt looked unlikely when Washington lost star right-fielder Bryce Harper to free agency a year ago. But left-fielder Juan Soto, who does not turn 21 until Friday, has shone in only his second season in the big leagues.

And there is an intriguing comparison at third base, with two candidates for their league’s most valuable player (MVP) title on show, while both have links to the opposing city.

Houston-born Anthony Rendon, a graduate of that city’s Rice University, will line up for the Nationals as an NL MVP contender, having led the majors with 126 runs batted in (RBI).

Opposing him at third base for the Astros is Alex Bregman, an AL MVP contender. Coincidentally, his grandfather Stan was the Washington Senators’ chief lawyer, negotiating their sale to Texas in 1971.

Washington’s first World Series – or is it?

No fewer than three different teams, all called the Washington Senators, played in the nation’s capital between 1891 and 1971. The first folded in 1899, the second ran from 1901 and won the World Series in 1924.

In 1960, that team moved to become the Minnesota Twins. They were immediately replaced in 1961 by an expansion franchise, again called the Washington Senators. (Still with me?) But only a decade later, that team decamped to Texas, where they still exist as the Texas Rangers.

Baseball returned to the capital in 2005 when the Montreal Expos were relocated, becoming the Washington Nationals. They groundshared with Major League Soccer’s DC United for three seasons, before moving to the purpose-built Nationals Park – as seen at twilight in the title sequence of TV show House of Cards – in 2008.

Look out for the Presidents’ Race in the middle of the fourth inning, as figures depicting four iconic US Presidents – George Washington, Thomas Jefferson, Abraham Lincoln and Teddy Roosevelt – run around the stadium. 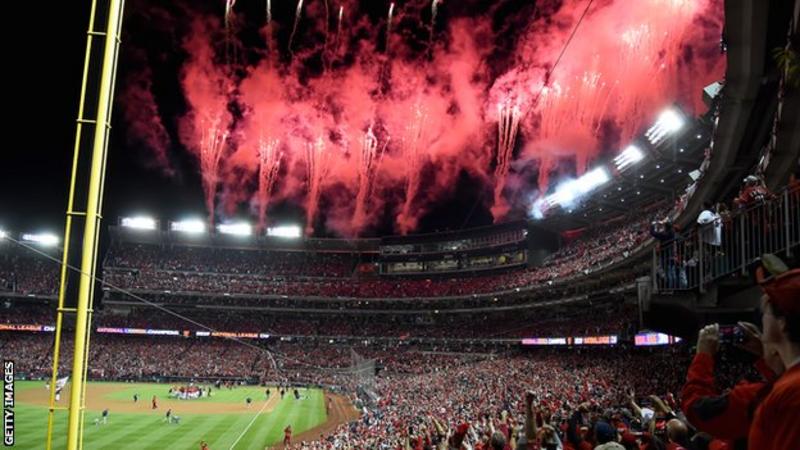