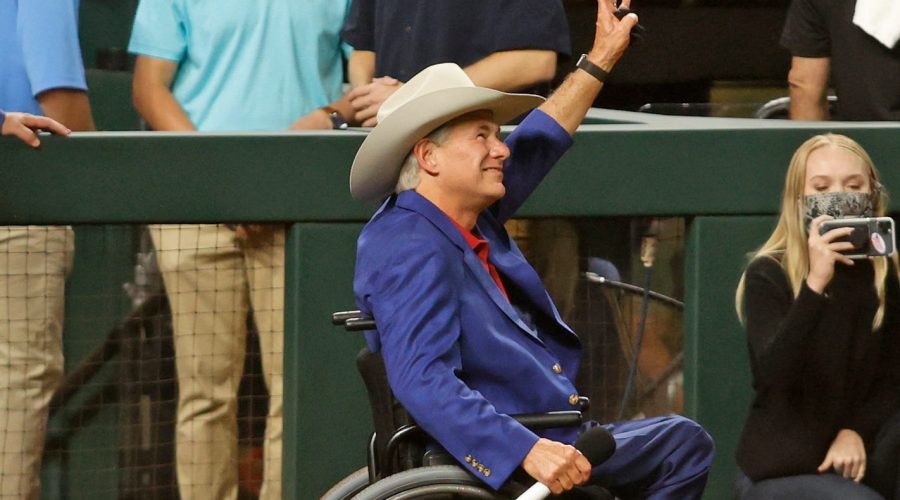 Texas Gov. Greg Abbott announced Monday that he would not be participating in the first pitch ceremony during the Texas Rangers' home opener at Globe Life Field because of the MLB's decision to move its All-Star Game from Atlanta over recent voting legislation that passed in Georgia.

Abbott made the announcement in an open letter to Neil Leibman, president of business operations and chief operating officer of the Rangers, that published Monday.

"I was looking forward to it—until Major League Baseball adopted what turned out to be a false narrative about the election law reforms in Georgia, and, based on that false narrative, moved the MLB All-Star Game from Atlanta," Abbott wrote. "It is shameful that America's pastime is not only being influenced by partisan political politics, but also perpetuating false political narratives."

Abbott went on to say he "will not participate in an event held by MLB, and the State will not seek to host the All-Star Game or any other MLB special event."

ALL-STAR GAME: MLB's move is most important move since integration

REPLACING ATLANTA: Where will MLB move the game?

MLB commissioner Rob Manfred said Friday that the decision was the “best way to demonstrate our values as a sport” after the voting bills will disproportionately affect citizens of color.

"Over the last week, we have engaged in thoughtful conversations with Clubs, former and current players, the Players Association, and The Players Alliance, among others, to listen to their views,” Manfred said Friday in a statement.

“I have decided that the best way to demonstrate our values as a sport is by relocating this year’s All-Star Game and MLB Draft. Major League Baseball fundamentally supports voting rights for all Americans and opposes restrictions to the ballot box."

On March 26, Georgia Gov. Brian Kemp signed legislation passed by both state houses a Republican-led overhaul of state elections, rolling back voting by mail and other absentee balloting efforts and even banning the distribution of food and water to those standing in line to vote.

Abbott closed his letter Monday by saying the decision doesn't diminish the "deep respect" he said he has for the Rangers organization.