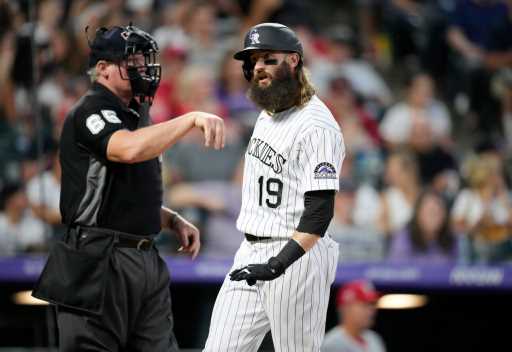 The Rockies have moved past the midway point of the season. We knew going into the season that they weren’t going to be a .500 team, let alone sniff playoff contention.

As for the dire predictions by many that the Rockies would lose 100 games for the first time in franchise history, I don’t think that’s going to happen. I never did.

Entering Saturday night’s game against the Cardinals, the Rockies were 35-48, on pace to finish 68-94. Before the season, I predicted that the Rockies would finish 72-90. I still think that’s about right.

Here’s a look back at the first half of their 2021 season, by the numbers:

.630: Winning percentage at Coors Field that ranks as the seventh-best in the majors. The Rockies are on pace to finish with a 51-30 home record that would tie the 2009 team for the second-best home mark in franchise history. The 2010 team finished 52-29 at Coors.

.371: Slugging percentage for Charlie Blackmon, which is well below his .498 career mark. Blackmon turned 35 on Thursday and I’m wondering where his power has gone. He’s hit just four home runs.

.758: OPS for shortstop Trevor Story, a big step down from his career OPS of .865. Story is hitting just .251 in what’s been a very up-and-down year for him, but I still think he’ll be traded before the end of this month.

2.42: ERA for right-hander German Marquez in June, when he went 4-1 in six starts. Teams have been calling the Rockies about Marquez but I don’t think there is any way the Rockies trade him. He has a team-friendly deal through 2024.

4.17: Overall home ERA. It would rank as the best in franchise history. The 2010 team currently holds the franchise record (4.25).

3.40: ERA for starters at Coors Field, which is remarkable.

.284/.342/.477: Slash line at home. Colorado’s home batting average is the best in the majors, its on-base percentage ranks sixth and its slugging percentage is second.

.196/.270/.296: Slash line on the road, where the Rockies rank last in the majors in average, on-base percentage and slugging percentage. Colorado has scored just 97 runs in 37 road games.

.345: June batting average for left fielder Raimel Tapia, who’s ridden a roller coaster this season but has still been productive. He led the majors with 15 doubles in June, the second-most in any month in franchise history. Only Todd Helton, who hit 18 in 2020, had more.

15: Blown saves by Rockies relievers, tied for fourth-most in the majors.

.160: Batting average for catcher Dom Nunez, the lowest in the majors (minimum of 150 plate appearances). He’s hitting .110 (8-for-73) since May 12. Despite Elias Diaz’s recent home run surge (four homers in four straight games), it’s clear that the Rockies have to do something to beef up their catching corps.