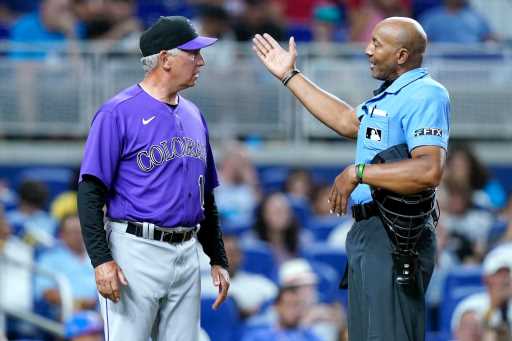 Fresh off a sweep of the Padres at home, the Rockies reverted to their disappointing road form in Tuesday’s series opener at LoanDepot Park.

Miami defeated the Rockies, 9-8, as Marlins first baseman Garrett Cooper atoned for a costly error by delivering the game-winning RBI in the eighth inning. Colorado had an early lead, blew it, then tied the game before Cooper handed the visitors the loss.

The Rockies’ bats kept them in the game, but their 13 hits were ultimately for naught thanks to suspect pitching and, once again, suspect defense with a season-high four errors. Ryan McMahon was 3-for-4 with three RBIs and a homer, but that wasn’t enough as last-place Colorado dropped to 2-8 in road series openers this year and 11-19 overall away from LoDo.

Jose Iglesias got Colorado going with an RBI infield single in the second inning, and Colorado added to its early lead with Brendan Rodgers’ two-RBI double in the third and McMahon’s solo homer in the fourth to make it 4-0.

But the wheels fell off for rookie right-hander Ryan Feltner in the fourth, when the Marlins put up five runs and the three-hour, 42-minute game got crazy.

Jorge Soler opened that inning with a single, then a catcher’s interference call on Brian Serven put Jesus Aguliar on. Avisaíl García promptly took advantage, smashing Feltner’s elevated fastball for a three-run homer. Jesus Sanchez then went deep the very next batter to tie the game, then Jon Berti’s RBI single with two outs made it 5-4 and chased Feltner from the game.

McMahon evened the game in the fifth with an RBI double off the center field wall to score C.J. Cron, but Jhoulys Chacín was tagged for three runs in the bottom of the frame as Miami went ahead 8-5. Only two of them were earned as Colorado committed three more errors behind Chacin. Iglesias bumbled a routine chopper and Randall Grichuk missed his cut on a throw from the outfield, allowing a run to score, on the same play Cron was also charged an error for missing a tag.

But the Colorado bats roared back to tie the game with three runs in the sixth inning off right-hander Dylan Floro. Cooper committed a costly error with two outs on a grounder that went between his legs and opened the door for the comeback. Then, McMahon’s opposite-field single tied the game 8-8.

But it was Cooper and the Marlins who would strike last. Cooper’s two-out, RBI double off Alex Colome in the eighth gave the Marlins a 9-8 lead, and Colorado couldn’t do anything against southpaw closer Tanner Scott in the ninth despite Grichuk drawing a leadoff walk.

Kuhl is coming off a so-so start, as he allowed three runs over five innings in a loss to the Guardians at home last week. But he’s been reliable on the road so far, as the right-hander is 2-2 with a 4.00 ERA in seven starts away from Coors Field. Kuhl’s limited hitters to a .259 road average in that span. He’s made six career appearances against the Marlins, with four starts, but has yet to get a win. He’s 0-4 with a 4.50 ERA against Miami. Meanwhile, Lopez spun six innings of shutout ball against the Rockies in LoDo on May 30, but got bombed in his last outing with six earned runs in five-plus innings in a loss to the Mets.

Trending: Right-hander Ryan Feltner hasn’t made it out of the fourth inning in two out of his last three starts, after being tagged for five runs (four earned) in three-plus innings on Tuesday,

At issue: Coming off a sweep of the Padres in which Colorado didn’t make any errors, the defensive miscues returned on Tuesday as the Rockies made three errors. Colorado has an MLB-worst 57 errors in 2022.

June 22, 2022 MLB Comments Off on Rockies drop series opener to Marlins, 9-8, behind poor pitching and season-high in errors
NFL News