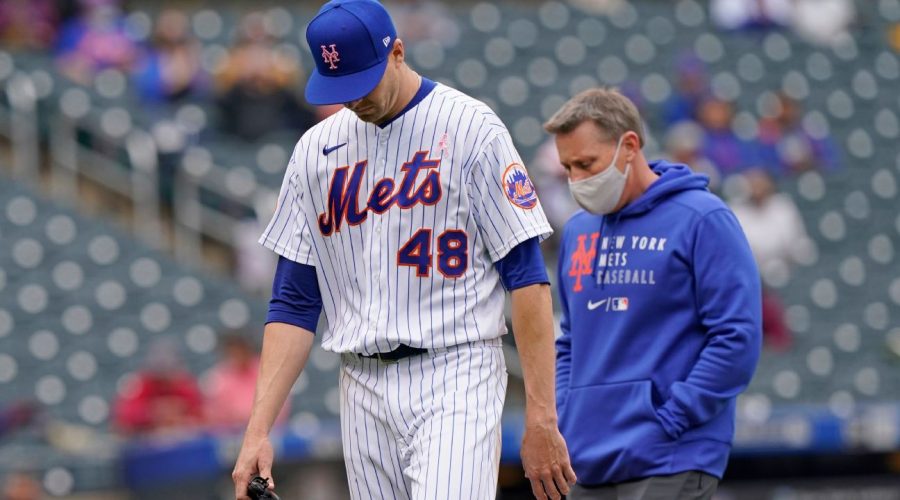 NEW YORK — Jacob deGrom will be placed on the injured list by the New York Mets with tightness in his right side, a move that will keep the ace from taking the mound until May 20 at the earliest.

The Mets said an MRI on Sunday night was “clean of any issues.” The team said it will place deGrom on the injured list before Tuesday’s series opener against Baltimore, a move that will be retroactive to Monday.

A 32-year-old right-hander, deGrom is 3-2 with a a major league-best 0.68 ERA and 65 strikeouts, two behind Trevor Bauer of the Los Angeles Dodgers for the NL lead. DeGrom has seven walks in 40 innings over six starts.

He pulled himself from Sunday’s outing against Arizona, his first appearance after skipping a start due to discomfort in his right latissimus dorsi, a back muscle that connects the upper arm to the spine and the hip.

The two-time NL Cy Young Award winner threw 68 pitches over five innings against Arizona, allowing one run, but he called for trainer Brian Chicklo when he felt tightness trying to get loose before the sixth. He left with Chicklo and went straight to the clubhouse.

DeGrom struck out six and allowed one hit. He was perfect through four innings before struggling in the fifth, when he allowed a run and walked three in an inning for just the second time in his big league career, the first since May 13, 2018, at Philadelphia. He left one inning in that game, his return from the injured list.

DeGrom is baseball’s hardest-throwing starting pitcher, with 79 pitches of 100 mph or higher since the start of the 2020 season, according to MLB Statcast. Miami’s Sixto Sanchez in second with 13.

Of those, deGrom reached 100 mph 42 times in the first inning alone. Sanchez is second with eight.

New York said it will announce a corresponding roster move on Tuesday.

May 10, 2021 MLB Comments Off on Mets to put deGrom on IL with side tightness
NFL News