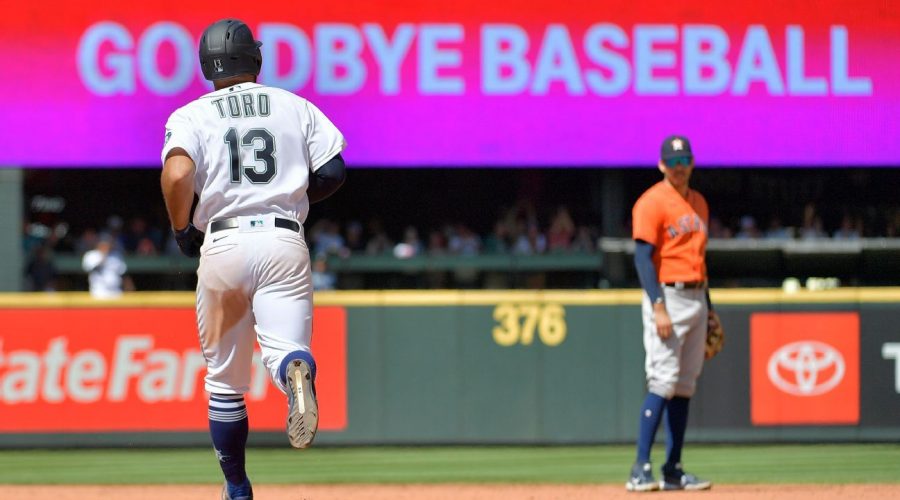 Even four days without games at the All-Star break could not interrupt a wacky July that was filled, as always, with home runs, some of them grand slams, some of them by relievers, as well as a ridiculous number of hit batters, wild pitches and, as always, strikeouts. So, with statistical assistance from the Elias Sports Bureau, here are The Quirkjians for July.

July 1
Kyle Schwarber — then a National — hit a double. Over his previous 35 games, he had 18 home runs — and no other extra-base hits. The only other player in major league history to hit that many home runs in a 35-game stretch and have no other extra base hits was Roger Maris in 1961, the year he hit 61 homers.

The Reds beat the Padres 5-4 to become the first team since the Tigers on April 11, 2010, to win a nine-inning game while leaving 18 runners on base.

July 2
Red Sox center fielder Enrique Hernandez drove in the go-ahead run in the 10th inning of a 2-1 victory over the A’s, then threw out the potential tying run at the plate in the bottom of the 10th. The last time that happened was 2008, when Phillies outfielder Shane Victorino did so in a 4-3 victory against the Braves.

Brewers pitcher Eric Lauer struck out four batters in 6⅓ innings in a victory over the Pirates, and he struck out four times. The last time a pitcher struck out at least four times in a game and failed to strike out more batters than his strikeouts at the plate was on July 2, 2019, by the Giants’ Tyler Beede.

July 4
The Mets’ Pete Alonso homered in both games of the doubleheader at Yankee Stadium, giving him 15 homers on the season, 14 of them on the road. And the Marlins’ Jesus Aguilar homered at Truist Park in Atlanta. That gave him 13 homers, all on the road (he has since homered in Miami). The record for most home runs hit in a season all on the road is 17 by Goose Goslin in 1926.

July 5
The White Sox’s four pitchers in their game against the Twins — Dylan Cease, Jace Fry, Ryan Burr and Garrett Crochet — all threw a wild pitch. It was the fourth time in history that a team used four pitchers in a game and all four threw a wild pitch, and the first since June 22, 2009, when the Angels’ Jason Bulger, Rich Thompson, Rafael Rodriguez and Matt Palmer did so.

Cubs infielder Eric Sogard pitched for the fifth time this season. The last time a position player pitched that many times before the All-Star break was 2017, when Twins catcher Chris Gimenez pitched six times, prompting him to say, jokingly, “Who needs Ohtani when they have me?”

July 6
Now that Giants pitcher Sammy Long and Tigers shortstop Zack Short have made it to the big leagues, it opens the possibility (though not for this year) for the first Long-Short at-bat in major league history. The careers of pitcher Chris Short and first baseman Dale Long overlapped for five years, but for 3½ years they were in different leagues. They never faced each other.

Padres reliever Daniel Camarena hit a grand slam off then-Nationals ace Max Scherzer. Camarena became the third reliever over the past 70 years to hit a slam, joining two Pirates, Enrique Romo in 1980 and Don Robinson in 1985. It was the first time Scherzer had ever allowed a home run, not just a grand slam, to a pitcher. It was Camarena’s first career hit. He is the first pitcher since 1900 to hit a grand slam for his first hit. The last position player to do that was Giants shortstop Brandon Crawford in 2011.

July 9
Padres reliever Austin Adams hit another batter. That made 14 in 31 innings. Only one pitcher in baseball history has hit 14 batters in a season of fewer than 100 innings: Otto Hess hit 15 in 93⅓ innings for the 1907 Indians. This time, Adams hit the Rockies’ C.J. Cron, the third straight game (total of four times) in which he’d been hit by a pitch.

July 10
The Dodgers beat the Diamondbacks 22-1. They hit two grand slams, giving them nine slams this season. The record is 14 by the 2000 A’s and 2006 Indians. The Diamondbacks (six), Royals (eight) and Pirates (eight) don’t have nine grand slams since 2018. In that game, Arizona reliever Matt Peacock pitched three scoreless innings in the loss. He is the fourth reliever to pitch at least three scoreless innings in game in which his team allowed 22 runs, the first since George Zuverink on Aug. 14, 1955.

July 11
The Marlins’ Pablo Lopez struck out the first nine Atlanta batters of the game, the first pitcher since 1900 to do that. It was the eighth time in history that a pitcher had struck out nine in a row at any point in a game, three of them this year, by Lopez, Jacob deGrom and Aaron Nola (who had 10). Lopez is the only one of the eight to strike out nine in a row, but not strike out anyone else in the game.

The starting pitchers in the Rockies-Padres game in San Diego were Jon Gray and Ryan Weathers. Gray got the win for Colorado.

Astros pitchers walked 14 batters, but Houston beat the Yankees 8-7. The Astros became the first team to walk 14 batters in a nine-inning game that it won since 1972, when the White Sox walked 15 and beat the Red Sox.

Twins outfielder Trevor Larnach struck out four times in a game for the second game in a row, making him the first player to do that since Dexter Fowler on Sept. 23-24, 2019.

July 16
Padres second baseman Jake Cronenworth hit for the cycle, only the third in franchise history. The Blue Jays have only three, the Rays two and the Marlins none. In that 24-8 victory over the Nationals (the only 24-8 game ever played), the Padres also got a grand slam from Wil Myers. The last team to have a cycle and a slam in the same game was the Giants 11 years ago when Bengie Molina did both. So in one game, Molina had more cycles than Babe Ruth, Willie Mays, Hank Aaron and Barry Bonds combined and as many grand slams as Derek Jeter and Pete Rose.

The cleanup hitters in the White Sox-Astros game (Brian Goodwin and Yordan Alvarez) each went hitless and stuck out four times. The last time two starting cleanup hitters did that in the same game was April 12, 2014, with the Braves’ Chris Johnson and the Nationals’ Adam LaRoche.

July 17
The Tigers beat the Twins 1-0 on a leadoff home run by Robbie Grossman. It was the first time in the glorious history of the Tigers that they won a game 1-0 with a home run leading off the first inning. The last time that happened to any team was when Nick Markakis did so in 2014 in the Orioles’ 1-0 win over the Mariners.

Shortstop Willy Adames hit his 16th home run. The teams for which he has played this year — the Rays and Brewers — are 16-0 when he hits a home run. The last player whose team was unbeaten when he homered in at least 16 games over a full season was the Reds’ Brandon Phillips in 2012 (17-0).

July 19
Then-Twins starting pitcher Jose Berrios gave up a walk-off home run to the White Sox’s Gavin Sheets. Granted, it was a seven-inning game, but it was the first time a starting pitcher had allowed a walk-off homer since Aug. 23, 2017, when the Pirates’ Josh Harrison hit one off the Dodgers’ Rich Hill in the 10th inning, ending Hill’s no-hitter.

July 20
Cardinals pitchers issued two more walks with the bases loaded, running their season total to 22. The last team with more in a season was the 2009 Brewers with 23. In the expansion era, beginning in 1969, the team with the most was the 1999 Mariners with 28.

July 21
Cardinals pitchers hit five batters in a 3-2 victory over the Cubs, and yet there was no HBP for Anthony Rizzo, who has been hit more times in his career than Willie Mays, Hank Aaron, Ted Williams, Mickey Mantle and Tony Gwynn combined. The Cardinals became the first team to win a game despite hitting five batters since the Astros hit seven in a 4-3 victory over the Rangers on June 9, 2018. The Cardinals became the first team to hit three batters in the ninth inning since June 27, 2016, when the Yankees hit three Rangers, all by reliever Kirby Yates. And the common denominator to the three games mentioned above is that catcher Robinson Chirinos played in all three.

July 24
In what has to be the highest combined numbers by starting pitchers in major league history, No. 99 Hyun Jin Ryu of the Blue Jays started against No, 99 Taijuan Walker of the Mets.

Padres pitcher Ryan Weathers hit a home run. His father, former pitcher David Weathers, hit two major league home runs. The only other father-son combinations to each hit a home run as a pitcher are Jim Bagby Sr. and Jr., Thornton and Don Lee, Clyde and Jared Wright and Mel Stottlemyre Sr. and his son Todd.

July 26
Shohei Ohtani recorded his 100th strikeout of the season as a pitcher. He got there with 35 home runs as a hitter. The previous record for most home runs by a pitcher in a 100-strikeout season was nine by Wes Ferrell in 1931. Ferrell is one of the best-hitting pitchers of all time. In 1935, he hit walk-off home runs in back-to-back games for the Red Sox, one as a pinch hitter, the next day as a starting pitcher.

The Tigers’ Joe Jimenez became the first pitcher in the modern era (since 1900) to throw less than two innings in an appearance (he pitched 1⅓), allow a hit, walk a batter, hit a batter, throw three wild pitches and somehow not allow a run.

July 28
The Twins had two six-run innings but never led in a 17-14 loss to the Tigers. The same thing happened to the Red Sox on June 29, 2019, in a 17-13 loss to the Yankees. The Tigers became the first team to be outhomered 7-0 in a game and still win. Twins catcher Ryan Jeffers hit a grand slam; it came one day after Twins catcher Mitch Garver hit a grand slam, marking the first time in major league history that a team got a grand slam from different catchers in consecutive games. And the Twins lost both games, the first team to lose consecutive games despite hitting a grand slam in each since the 2003 Brewers.

July 29
Gerrit Cole became the first pitcher in Yankees history to allow seven earned runs and strike out at least 10 in a start of less than six innings.

July 30
Just like on July 11, the starting pitchers in the Rockies-Padres game in San Diego were Jon Gray and Ryan Weathers. Gray got the win for Colorado.