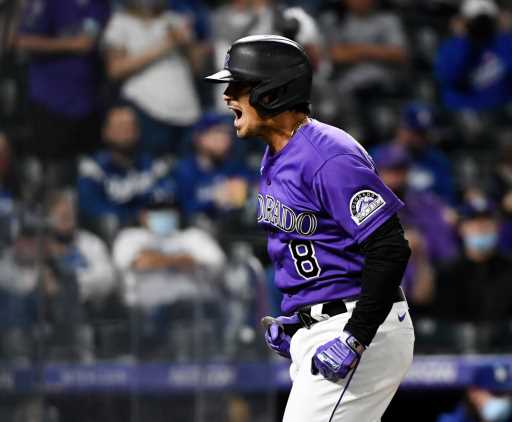 Springtime has not been kind to the Rockies’ health and third baseman Josh Fuentes is the latest player to battle an injury.

He was scratched from Sunday’s lineup against the Los Angeles Dodgers when he reported to Coors Field with a sore left wrist. He was originally lined up to bat second.

Manager Bud Black is crossing his fingers that Fuentes doesn’t miss any playing time. The Rockies’ next game is Tuesday against Arizona.

“I’m not quite sure exactly what happened to cause the injury, but his wrist flared up as the game went on yesterday,” Black said Sunday after Colorado’s 4-2 loss to the Dodgers. “He woke up this morning extremely sore and the training staff thinks that he’s going to be fine.

“He thought it might be OK when he got into the (batting) cage, but that wasn’t the case. So we’re hoping that the 48 hours will calm that wrist down and he’ll be able to play Tuesday.”

Injury updates. Outfielder Raimel Tapia, who slammed into the left-field wall Saturday night and suffered what Black called “whiplash” in his neck, was able to pinch-hit on Sunday.

Starting pitcher Jon Gray, who was taken out Saturday’s game early in the sixth inning because of what the team called “full-body cramping,” was doing fine Sunday and Black said Gray will make his next start on Thursday against the Diamondbacks.

Footnotes. Black would have liked to give right-hander German Marquez an extra day’s rest in the early part of the season, but the Rockies’ bullpen has been taxed, so Marquez will start Tuesday’s game on regular rest. … Los Angeles is 25-8 vs. the Rockies over the last three seasons and those 25 wins are the most by a National League team against a single opponent.