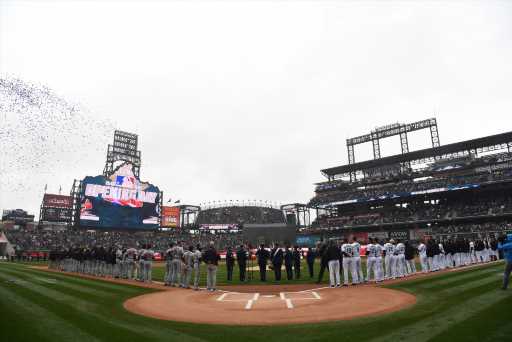 SCOTTSDALE, Ariz. — Marc Johnson is entering his 50th season as the head baseball coach at Cherry Creek High School. He longs for the day baseball returns to the spot it once held in America’s consciousness.

“I love baseball and want to keep it as America’s pastime as it was when I was a child,” Johnson said.

His dream appears to be slipping away. By many measures, Major League Baseball is in a troubling slump. Lagging attendance and TV ratings, games that take too long, a lack of action, a dearth of Black players and an inability to market itself well leave even those who cherish the game questioning its direction.

As the 2021 season nears, The Denver Post asked a panel of baseball experts what can be done to fix the game. The panel consists of former major leaguers and current TV analysts Harold Reynolds and Ryan Spilborghs, ESPN senior baseball writer Buster Olney, Denver Post columnist Sean Keeler, and Johnson.

Baseball needs more action on the field and more balls put in play. Given that, there’s talk that infield shifts should be banned? Do you agree?

Reynolds: I’m a fan of eliminating the shift. … Holes are going to open up, groundballs are going to become singles and doubles, and it’s going to change the whole game, both offensively and defensively.

Spilborghs: The shift has been part of the game for decades. I’d rather see the three-batter minimum thrown in the trash. And for the love of the game, give me the designated hitter! How is the shift worse than having pitchers hit? It makes zero sense.

Johnson: Allow the shift, but no players can be allowed out of the infield dirt.

Olney: Keep the shift. I like teams having the flexibility to place their defenders where it best suits them.

Keeler: Two tweaks. First, don’t ban the shift outright, but require infielders to set up with at least one foot on the infield dirt. Second, shrink the strike zone slightly. Will there be more walks? Sure. But you’ll get more strikes around the heart of the plate. And thus, more balls can be squared up.

In 2020, a record 36.1% of all plate appearances ended in either a walk, strikeout or home run. Is there a solution to this growing trend?

Olney: The powers that be need to somehow truncate the flooding of most games with fresh relief pitchers, many of whom come in throwing in the high 90s with nasty breaking stuff. Generally, hitters’ chances for putting the ball in play are greatly reduced by this use of analytics.

My idea is that there should be a rule limiting the number of pitchers for each manager to use every game, with obvious exceptions made for injuries and blowouts. I think the magic number is four pitchers per nine innings.

Spilborghs: The game has evolved to true outcomes: homers, walks and strikeouts. This is a byproduct of the financial gain for the outcomes in our sport. Pitchers are rewarded for throwing harder and striking hitters out. There’s not enough reward for making contact or pitching to contact. I believe teams that have focused on players with the innate ability to judge the strike zone, not chase, and make consistent contact have won at the highest level in the last five years. The Dodgers, Astros, Yankees, Oakland, Tampa Bay have consistently found pitchers and hitters who can function in the strike zone without great power or velocity.

Keeler: What was true for Wee Willie Keeler (possible relation) is still true now: Hit ’em where they ain’t. They ain’t in the bleachers, so that’s where hitters are aiming. Again, shrink the strike zone slightly. It’s either that, or deaden the ball.

Last season, the average major league game took a record 3 hours, 7 minutes to complete, topping the old mark of 3 hours, 5 minutes in 2019. How can MLB shorten games? And should it?

Olney: The bottom line is that baseball needs to make its product more attractive to younger fans by shortening games. It’s one thing to ask fans to wait through an NFL game for 3 ½ hours once a week; it’s an entirely different expectation to believe that a 16-year-old is going to sit through three- to four-hour baseball games six or seven days a week.

But MLB cannot shorten nine-inning games unless it has a collaborative relationship with players, who must speed up their actions between pitches. Unless players are invested in change, the change cannot happen.

The break-glass-in-case of emergency is to reduce games to seven innings, and while I do believe that will eventually happen, it won’t happen soon, and would only occur after a huge, landscape-changing labor war that ends with the owners essentially emasculating the union. Nobody should want that.

Spilborghs: The length of games doesn’t bother me; NFL games are just as long. I prefer the expanded playoffs because more teams in playoffs make the season entertaining. I’d like to see the season cut back to 154 games. Also, the California tie-breaker (extra-innings rules) should remain, as should seven-inning doubleheaders.

Reynolds: Eliminating the shift will stop people from complaining and worrying about the pace of the game because there will be more action. You will have more and more balls in play.

Keeler: Cap mound visits. Use a pitch clock and invoke the thing. Give batters a time limit, too. None of this has to be radical or dictatorial. But it’s gotta be enforced.

According to market research, only 22% of Americans know who Angels superstar Mike Trout is. Meanwhile, 79% know who NFL quarterback Tom Brady is. How does baseball solve its marketing problem?

Reynolds: I don’t like the word fix, but baseball has and should continue to expand its reach by marketing the players, which is something we constantly do on “MLB Tonight.” Every night, we’re talking to these stars who make these incredible plays, and we hope our conversations are reflected in the daily sports talk across the country.

We also have to continue to emphasize how global our game is. The young talent and international appeal of some of our brightest stars should put baseball front and center on the global stage.

Johnson: For marketing purposes, put the emphasis on families and make the game more affordable.

If you want the kids to watch, get on the platforms kids are actually watching. MLB could run circles around the NFL here. Because of the intense regional and provincial lobbying baked into the business side of the sport, they don’t.

Olney: The marketing problem can’t be fixed until MLB and the Players Association can consistently work together. The current relationship is the worst I’ve seen in the 34 years I’ve covered professional baseball.

Spilborghs: Teams prefer to market their franchise — with the players reflecting the ideals of the team. That needs to switch. Teams can still embrace their history, but they need to focus more on how they can reflect their players.

San Diego’s Fernando Tatis Jr is a great example. Does he represent the Padres past? No. He exemplifies the Padres’ current state and future, and the organization embraces the change. All this means that owners need to look at this as a player-driven league, not a franchise-driven league. That’s a seismic change.

In 1981, 18.7% of players on major league rosters were Black. Now it’s less than half of that. How can baseball attract more Black athletes to the game?

Reynolds: People see the 8% number at the major league level and that’s where they think the story stops, but I contend if you want the full story, to see if a change is coming, you have to look at the youth level.

I’m encouraged to say that Black kids are playing baseball and softball, and the growing numbers in youth baseball give me hope. The number one issue for Black participation has been the cost of equipment and tournament ball, and I have seen first-hand the efforts that (MLB’s chief baseball development officer) Tony Reagins and MLB have made to combat these challenges and give all kids a chance to participate.

Olney: Baseball officials have talked about finding ways to draw more African American players into the game, putting some resources into grassroots programs. But in the end, they haven’t really come close to applying the full potential of the sport’s financial power to make this happen.

Johnson: We need to try to get more minorities playing by age 6-12. Perhaps corporations could help fund the cost of development.

Spilborghs: Make the game more accessible to more players and athletes. Why can’t MLB teams invest more into their own communities than they are doing now? There are plenty of academies in other countries, why can’t there be investments for both?

MLB and the MLBPA need to continue their joint efforts in growing the game. Focus the efforts together to offer better coaching tools, apps, clinics and opportunities for players.

There are so many layers to this issue. Coaching needs to be better and equipment needs to be cheaper (the cost of cleats, a glove, and a bat are outrageous). If players aren’t on some “travel-ball team,” which costs a lot of money, players can get left behind because they’re not getting reps.

Keeler: Market the heck out of your Black stars. Give children a superstar, adult role model and they’ll follow him or her. Also, hire and promote minority candidates for managerial, coaching and front-office positions aggressively. And let the world see you do it.

HOW TO FIX BASEBALL PANELISTS

Harold Reynolds: Played 12 seasons in MLB as a second baseman and is now the lead studio analyst for the MLB Network.

Ryan Spilborghs: Played seven seasons as an outfielder with the Rockies and now works as a Rockies analyst for AT&T SportsNet Rocky Mountain.

Buster Olney: Is a senior writer for ESPN.com and reporter for ESPN’s Sunday Night Baseball telecasts. He previously covered the Yankees for The New York Times.

Sean Keeler: A diehard White Sox fan and award-winning writer, Keeler joined The Denver Post in 2018 as a columnist.

March 28, 2021 MLB Comments Off on How to Fix Baseball: Weighing in on infield shift, pace of the game, superstar reach and declining Black participation – The Denver Post
NFL News