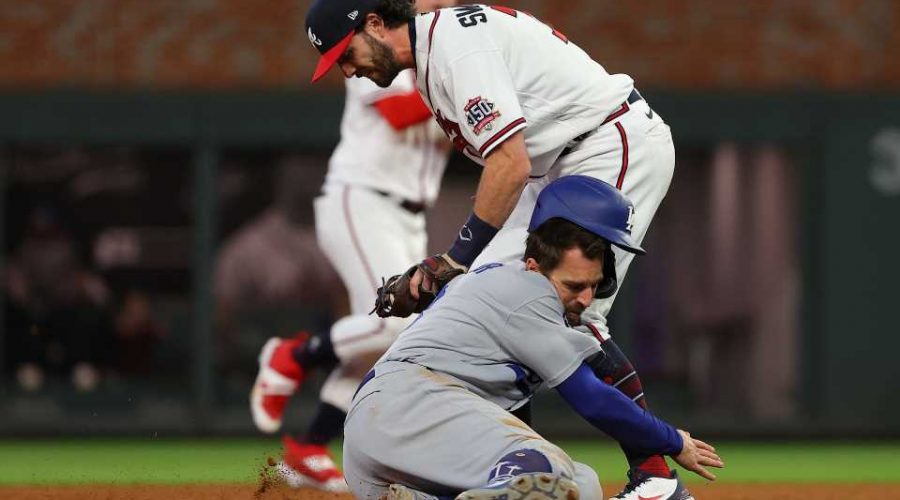 There’s an adage in baseball: Don’t make the first or last out of an inning at third base. Dodgers center fielder Chris Taylor made the final out of an inning between third and second, and it could not have come at a worse time.

Taylor gave the Dodgers a two-out baserunner in the top of the ninth of a tie game Saturday and looked ready to set the team up with runners on the corners after a single by Cody Bellinger, but he made a last-second decision to turn back to second and was tagged out in a rundown to end the inning.

The next half-inning, Braves third baseman Austin Riley singled down the left-field line to score second baseman Ozzie Albies and walk off the Dodgers 3-2 in Game 1 of the NLCS.

It looked at first that no matter what Taylor was going to do on the bases, he would be safe. The single by Bellinger was hit softly over the head of Albies, and right fielder Joc Pederson threw the ball directly to second rather than try for third. According to Baseball Savant, Taylor ranks in the 91st percentile in sprint speed, making him one of baseball’s faster players.

But Taylor decided halfway between second and third to turn around and head back to second. Shortstop Dansby Swanson threw the ball over to Riley, who dished it back to Swanson to catch Taylor in the rundown.

While there was certainly no guarantee the Dodgers would score a run, Los Angeles would have had a runner in scoring position — second or third — for Mookie Betts, who finished the season among the team’s best hitters with a .854 OPS.

After the game, Dodgers manager Dave Roberts said “by the book, (Taylor) should have probably stayed,” but his indecisiveness cost him.

“I think it was hit softly, it was kind of towards the gap and so I felt that he thought he had a good read on it. It’s kind of one of those where you’ve got to pick,” Roberts said. “You’re either going to go hard and I don’t know if Joc would have thrown to third right there and just conceded that base or just hold up and two outs and give Mookie a chance, but I think right there, he was kind of caught in between. That’s kind of when you get in trouble.”

According to the 2019 run expectancy matrix, per Baseball Prospectus, a team has an expected run scored of 0.5182 with runners on the corners and two outs, compared to 0.4666 with runners on first and second base and two away, so the difference in scoring odds were slim.

Maybe Betts would have come up empty in his at-bat and gone 0 for 5. Maybe he would have come up with a hit to give Los Angeles the lead. Unfortunately for the Dodgers, they will never know, and now they’ll have to return to Truist Field on Sunday trailing the Braves in the NLCS 1-0.