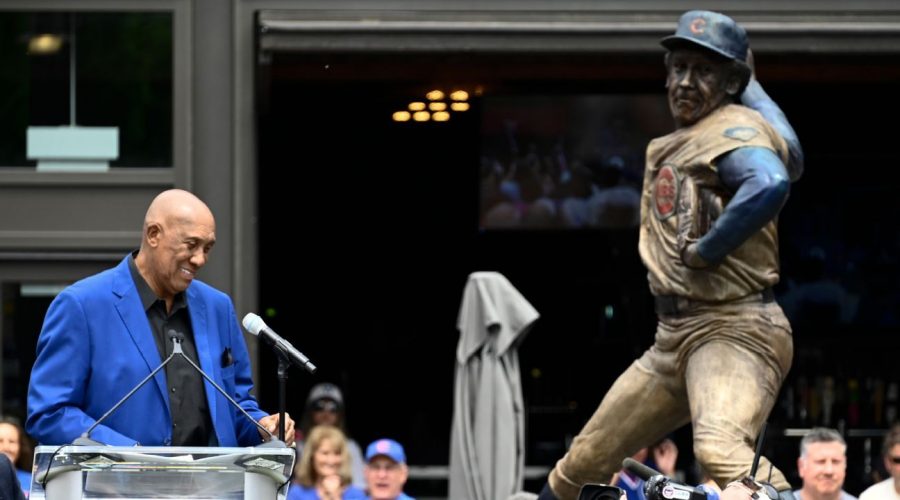 CHICAGO — The Chicago Cubs unveiled a statue of six time 20-game winner and Hall of Fame pitcher Ferguson Jenkins during a ceremony outside of Wrigley Field Friday morning.

Jenkins, 79, was in attendance with family as the sculpture was unveiled next to those of other former great Cubs.

“The statue is sitting beside my fellow teammates, Ernie (Banks), Billy (Williams) and Ronnie (Santo),” Jenkins said during the ceremony. “Believe me, I’m humbled.”

The sculptures are part of a new “statue row,” which resides just outside the third base gates.

He’s one of 11 pitchers in MLB history with 4,500 innings pitched, to go along with more than 3,000 career strikeouts. He finished in the top six in Cy Young voting six different times, taking home the award in 1971.

“I was looking at some of his stats, the 20-win seasons, they just jump off the page to me,” Cubs manager Davis Ross said. “What a big deal it was to get one (20-win season) of those in my playing era. Kudos to him.”

“I think about what he might do to me if I took him out in the fourth or fifth inning,” Ross joked.

Of the 70 living Hall of Fame players, five were in attendance for the event, including Jenkins, Andre Dawson, Ryne Sandberg, Williams and Lee Smith.

The statues of Santo, Williams, Banks and Jenkins now reside below the Cubs offices.

“I like what they’re doing out there,” President of Baseball Operations Jed Hoyer said. “I can look down from my office and see all (the) Mt. Rushmore of Wrigley right below me. Couldn’t be happier to see Fergie have his unveiling.”

Jenkins was a multi-sport athlete who also performed with the Harlem Globetrotters for several off-seasons. He also played hockey and lettered in track-and-field. His best performances, of course, came on the mound where he’ll forever be a fixture outside of Wrigley Field.

“I want to thank the (ownership) Ricketts family for this particular day and the statue,” Jenkins said. “And now my dreams have come true.”