As he was for the entire postseason, Los Angeles Dodgers shortstop Corey Seager was at his best when the stakes were the highest.

Seager drove in Mookie Betts with the go-ahead run in the sixth inning as the Dodgers defeated the Tampa Bay Rays 3-1 in Game 6 to wrap up their first World Series championship in 32 years.

"We talked about that for a long time, just grinding (at-bats) out, scratching runs," he told Fox Sports. "The postseason is not about the pretty games or anything like that. If you win at the end it doesn't matter. We did that."

Seager finished the series with a .400 average and .556 on-base percentage with a pair of home runs and five RBI. He also led all players with seven runs scored. 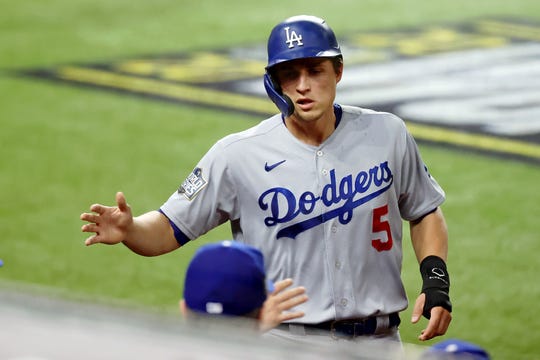 Seager, the 2016 NL rookie of the year and a two-time All-Star, would certainly have been named to the All-Star team this year after hitting .303 with 15 home runs and 41 RBI in the shortened 60-game regular season.

However, Seager turned his game up a notch in October with a .328/.425/.746 slash line — and his eight home runs would have tied a postseason record if not for the amazing performance by the Tampa Bay Rays' Randy Arozarena, who hit 10.

Seager's heroics came on the heels of him winning MVP honors in the National League Championship Series as the Dodgers rallied to defeat the Atlanta Braves.

"This was just awesome," Seager said after receiving the Willie Mays MVP trophy. "What this team's accomplished this year … the resilience, the effort, the energy — everything that this team's done this season, it's just fun to be a part of."

With that, Seager became the first player since Madison Bumgarner of the San Francisco Giants in 2014 to be named the MVP of both the LCS and World Series in the same postseason.