Corbin Burnes' amazing streak is finally over – but not before he staked his claim as the game's greatest control artist to start a season.

The Milwaukee Brewers right-hander issued his first walk of the season Thursday, a 3-1 fastball too high to St. Louis Cardinals shortstop Tommy Edman – but not before passing Kenley Jansen for the most strikeouts to start a season without a walk.

A second-inning strikeout of Harrison Bader was Burnes' fourth of the game and 52nd of the season, surpassing Jansen's 51 strikeouts without a walk to begin the 2017 season.

Burnes would go on to strike out six more batters – and run up a pair of three-ball counts – to stretch his streak to 58 strikeouts without a walk. Then Edman, who has a .337 on-base percentage, laid off four balls and the streak was done, eliciting a modest round of appreciative applause from the home crowd in Milwaukee. 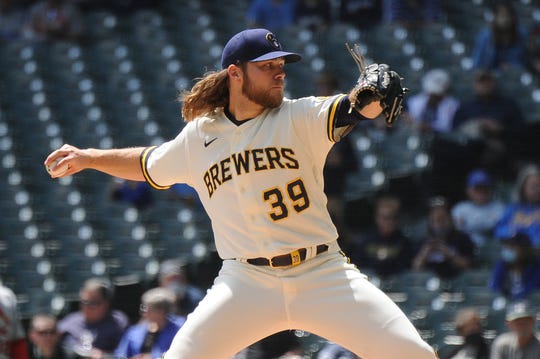 On April 21, Burnes struck out 10 San Diego Padres, breaking Adam Wainwright's 2013 record of 35 strikeouts without a walk by a starting pitcher to begin a season, a mark that dates to 1893, when the pitching rubber was set at 60 feet, 6 inches.

Thursday was Burnes' first start since April 26, which preceded a positive test for COVID-19 and a trip to the injured list.

He said he was asymptomatic and Thursday looked largely unaffected – nine strikeouts in five innings, running his total to an astonishing 58 strikeouts in 34 ⅓ innings.

And now, against just one walk.