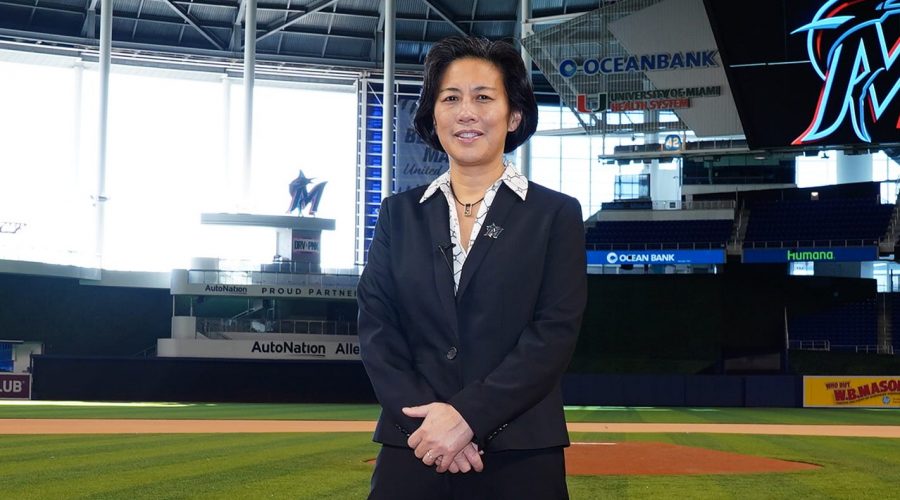 Kim Ng is so attuned to the rhythms of baseball that for the past three months, ever since the Miami Marlins hired her as the first woman general manager in major league history, her thoughts have bounced between the familiarity of her life’s work and the groundbreaking nature of it.

With more than two decades of front-office experience, including stints as assistant general manager of the Dodgers and Yankees, Ng’s internal clock turned right back on after the Marlins hired her in November – from the incessant drumbeat of the off-season, to pitchers and catchers reporting for spring training, and finally to Tuesday morning, a touchstone moment when the full Marlins roster, constructed in part by her, gathered in Jupiter, Florida for the first full workout.

On one hand, it was no big deal – Ng has been here before and will act as such.

Yet after more than a dozen interviews for GM jobs she did not get, followed by a decade working in Major League Baseball’s central office, it dawned on her how long she’d been away from a team, from this day.

And as the rain cleared out and sunshine illuminated Palm Beach County, this would be her team taking the field.

“It’s my first as a general manager,” Ng said Tuesday on a video call with media, “but I think it’s also my first spring training in a long time, and that definitely adds to it. And as I’ve sat here the last week or so with these guys, it all comes back to me very naturally and in my head I’ve thought, ‘This is what I’ve done for most of my career,’ and nothing has taken me by surprise, yet, which is a good thing.

“Having been here before as an assistant general manager for 13 years and knowing how spring training goes – those are all things of comfort. You just realize you’ve been here before.

“The only thing really different is, now you get to make the decisions.”

And in a Marlins organization filled with young and emerging players, there will be plenty to make.

Ng and the baseball operations department she helms have already fine-tuned a club that snagged a berth in the expanded 2020 playoffs and promptly swept the Chicago Cubs out of them. Slugger Adam Duvall, non-tendered by the Braves, is the new left fielder. The bullpen has been almost completely remade. A veteran starter may yet join a group of power arms led by Sandy Alcantara and Sixto Sanchez.

And Ng says she was most intrigued to put her eyes on a second base derby among Jon Berti, Isan Diaz and Jazz Chisholm. To get on the field level and see why shortstop Miguel Rojas is so valued throughout the organization.

It will be a welcome close-up after the enduring restrictions wrought by COVID-19 cancelled or disrupted many annual rites. The GM meetings were cancelled, the winter meetings, such as they were, held virtually.

And on the day pitchers and catchers reported, so, too was another ritual – addressing the squad.

The Marlins did the best they could, gathering the reported players and looping in the whole squad on Zoom. Principal owner Bruce Sherman spoke, as did club CEO and Hall of Famer Derek Jeter.

And then Ng, a long-anticipated moment where her message came through a screen, rather than echoing off the walls of a spring clubhouse.

“It was a little surreal being on Zoom with all these guys,” she says. “And it was hard to get to really get a sense from them how they were feeling. Once you get out there and you’re live, you definitely get the vibe.

“The message was, this is a fresh start for everybody. And that there was a lot of grit and resilience that we saw last year, and that we just hope to build upon it. The other thing we impressed upon them is that this is about their careers. And they should take each day with care, and that relates, also as well, to COVID, and that we’re all really careful.”

The Marlins were the first club battered by the coronavirus, losing 18 players within the season’s first week, yet former GM Michael Hill cobbled together reinforcements and made the playoffs with a 31-29 record.

Hill and the Marlins could not agree on a new contract after the season, and Hill joined MLB as a vice president of on-field operations.

That opened the door for Ng’s historic hire, which resonated worldwide. International operations were part of Ng’s purview at MLB and she heard from colleagues in China, friends in South Africa who saw her hiring in the newspaper, and associates in South America.

Now, it’s time for the grind, historic and unremarkable at the same time. She and manager Don Mattingly talk almost every day, “kind of a typical relationship with the general manager,” he notes.

The spring days are long. Ng has taken up running again, brought her tennis racquet but needs a partner, and managed a walk on the beach the other day, to “clear the head.”

Not when you’re calling the shots.

February 23, 2021 MLB Comments Off on As Kim Ng’s Marlins take field, MLB’s first female GM is ready: ‘Now you get to make the decisions’
NFL News