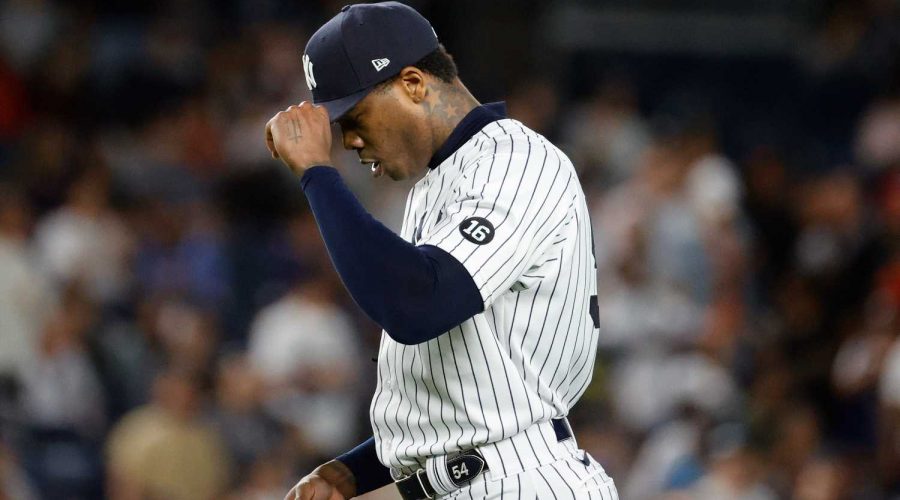 The Yankees knocked Shohei Ohtani out of the game in the first inning by scoring seven runs off the Angels star. It still wasn’t enough to earn them the victory.

New York collapsed during the ninth inning to hand the Angels an 11-8 win. The Yankees’ star closer Aroldis Chapman simply couldn’t find the strike zone and allowed four runs in the inning, including a game-tying grand slam to Jared Walsh.

All told, the Angels scored seven runs in the inning, matching the Yankees’ crooked total from the first inning.

Aaron Boone didn’t mince words when talking about the loss after the game, which lasted until the wee hours of Thursday morning due to two rain delays.

“Terrible loss,” Boone said, per SNY’s Alex Smith. “Continue to have good at-bats to give ourselves chances to blow the game open and couldn’t get it done, so let them hang around enough and it was obviously a struggle there in the ninth.”

New York’s late problems were largely due to Chapman’s shaky command. He walked three of the five batters he faced and threw just 10 strikes on 24 pitches.

“Today, [Chapman] just struggled obviously finding the zone,” Boone said. “Credit the Angels, they worked some good at-bats against him and then obviously a big swing.

“Frustrating, disappointing, terrible. We’ve got to pick ourselves up.”

Chapman’s poor outing wasn’t his first in recent appearances. Since June 10, Chapman has blown two saves and suffered two losses in addition to his collapse against the Angels on Wednesday. He has posted an ERA of 17.47 in those eight games and has walked eight batters in 5 2/3 innings. He only has six strikeouts in that span.

Despite that, Chapman’s is confidence that he can “get back on track” in the coming days.

“I have my confidence,” Chapman said, via a translator. “I think the work I’m going to put in, I should be able to get back on track.”

Chapman isn’t the only one that needs to do that. The Yankees are just 1-5 in their last six games and seem to keep finding ways to lose, as they did against the Angels. They continue to slip down the AL Standings and now trail the Red Sox by 8.5 games for first place in the AL East and are 5.5 games back of the second Wild Card spot.

“We’ve spoken a ton. Everyone’s said everything they need to,” Boone said. “The guys have spoken to one another. … Talk is cheap right now. We need to go out and play full games and start hammering some people.”