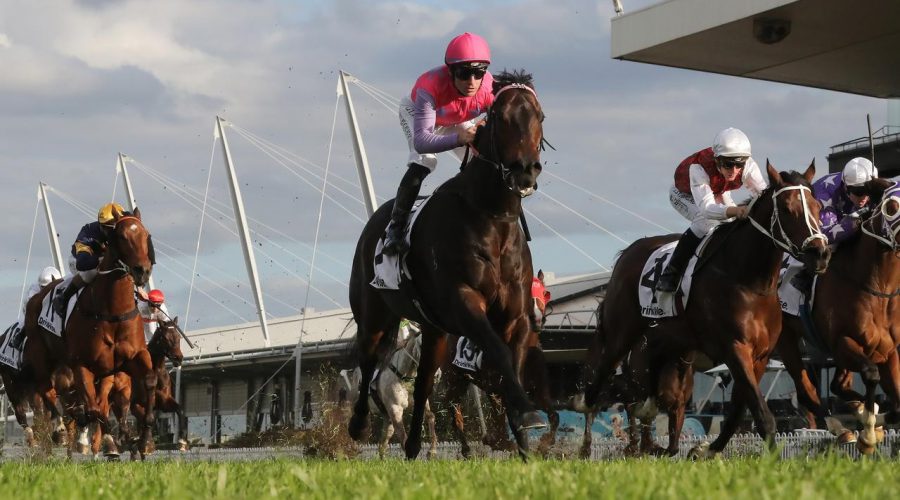 Saturday’s meeting at Rosehill Gardens marks 12 weeks until the Everest.

It will also be the time and place for Trumbull to make his case and tempt the remaining Everest slot holders.

“They’d be mad not to have a look at him,’’ Trumbull’s trainer Kim Waugh says.

Trumbull has already had a taste of Everest day; he won the Group 2 ATC Sydney Stakes (1200m) in 2020 – a race that is carving out it’s own niche as ‘the Everest consolation’.

‘’He had a gallop this morning (Monday) on the course proper and he worked beautifully,’’ Waugh said. “I am looking forward to seeing him run on Saturday.’’

Prior to that, Waugh has a busy day ahead at Wyong on Tuesday with four of her string involved including a couple of lightly-raced and promising types.

Waugh’s aptly-named Pretty Enuff makes an anticipated debut in the Carlton Dry Prov. & Country Maiden Handicap (1200m) off the back off two impressive trials on the Central Coast.

‘’She has taken a bit of time,’’ Waugh explained. “She is a real big, heavy filly so she has taken time to just mature.

‘’She is built like a colt but she is a good looking filly, she’s beautiful.’’

Pretty Enuff even at this stage, seems a ‘cheap buy’, knocked down to Waugh for $50,000 at the Inglis Classic Sale despite her close relationship to Golden Slipper and Magic Millions winner Phelan Ready.

Tommy Berry, aka Trumbull’s jockey, will combine with Waugh in the final event on the program aboard up and comer The Mistral who like Pretty Enuff also has a Golden Slipper connection.

His fourth dam is Rory’s Rocket, the mother of the flashiest Slipper winner on record – Rory’s Jester.

‘’The Mistral goes well, he has just been a really green horse that has taken a bit of time also,’’ Waugh said.

“He was going to go to Scone on Sunday but he drew badly so we waited for Tuesday and I think he will go well.’’

The Mistral finished more like a tornado when he stepped out for the first time in a 1000m maiden at Muswellbrook running 57. 31 seconds and roaring away late.

A favourable barrier in a suitable race could be the ingredients to cook up a first win for the cleverly-named Don’t Recall in this afternoon’s Great Northern Maiden Plate (1350m).

Don’t Recall is by Star Witness out former handy racemare No Comment whose sire Danzero beat St Covet by a nose in the 1994 Golden Slipper.

‘’She has put in a couple of good runs,’’ says Waugh. ‘’She was a bit the same as my other two, a little bit immature, so we tipped her out and gave her a little bit more time. She is a lovely looking filly.’’

Pink Beau will no doubt appreciate a better barrier and firmer track at home again in the Coca-Cola Handicap (1300m) after bombing out at Muswellbrook 18-days ago.

‘’She’s a big gross filly and has taken a couple of runs to come to hand this prep so hopefully she can do something,’’ Waugh said.

July 19, 2021 Horse Racing Comments Off on Wyong Tuesday: While Kim Waugh has The Everest aspirations there are still other races to concentrate on
NFL News