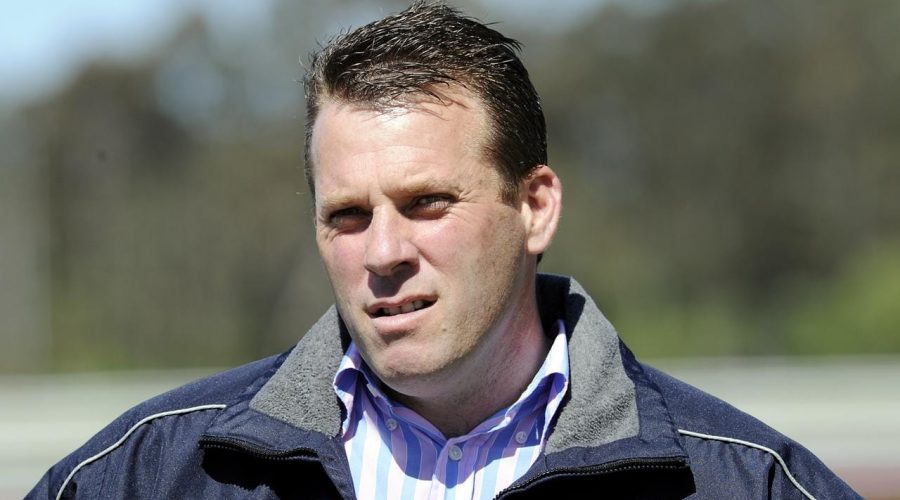 Local trainer Brett Partelle has a stand out chance in the last race at Wyong on Thursday but two stablemates are good each way hopes as well.

Rifles leads the charge in a Benchmark 64 Handicap (1000m) and he’s had one tune-up trial since going for a nine-week let-up.

He’ll jump from barrier one under Keagan Latham who has ridden him at his past seven starts.

“He’s in nice shape. He’s not completely wound up but he’s ready to kick his campaign off,” Partelle said.

“He’s forward enough to be competitive. He has a quirky nature so we’re hoping he turns up in the right frame of mind with improvement to come.

“I would’ve liked to have drawn four or five so he could be one-off but Keagan knows him very well.”

Rifles would have resumed earlier if Mother Nature had not intervened and Partelle said punters could put a line through his last start fifth at Hawkesbury.

“We got hit by the floods which put our whole stable out of play for a good month. We couldn’t get off our property for seven days,” he said.

“It was the track. If you were on the inside it wasn’t the place to be. He took a backwards step on opening and went back to the inside where it was a lot slower on the day.

“He just didn’t like that shifty going. They all came to the centre of the track. He’s a horse that on his day can win a nice race.”

Perfect Style and Trust Me are the two stablemates who will be out to cause an upset and they’re not completely out of it.

They both resume and should start over the odds on a good-rated surface which they will both appreciate.

Trust Me (White, Green Cap) is looking for his first win on his home track at Wyong on Thursday.Source:News Regional Media

“Perfect Style ran second behind Invincible Kiss and that form has been pretty strong because it hasn’t stopped winning,” Partelle said.

“He’s hit a couple of slippery track which is doesn’t like.

“He’ll probably lead them and he’ll improve out of the run and Trust Me is a bit the same.”

Trust Me is a seven-year-old trying to win his ninth race at start 41.

He’s performed well fresh in the past and loves the 1000m.

He does have to crack a Wyong hoodoo however, having not won at his home track in five attempts with just the lone third placing to show.

“He won the Kirby Handicap last year and came back running into some difficulty with tracks as well,” Partelle said.

“As an older horse, he needs to have the right footing. He likes a good track with just a little cut in it.

“We’ve had some of the worst weather for 12 months and we haven’t had a horse in the stable that handles the wet tracks.

“He’s still quite big but I just want to see him run well so we can go from there. It’s the same for the other two as well.”

He’s only managed to run seventh and ninth to date but Notabadbet is a better horse than that according to co-trainer Greg Lee.

The son of Alamosa lines up in a Maiden Handicap (1200m) at Wyong off a 17-week break since his last run at Gosford.

Lee thinks he’ll come into his own this time in.

“I think he’s a horse with ability. I’m not sure how good the others in there are but he should show up in that race,” he said.

“He was just a bit immature. He probably shouldn’t have been racing until now. I know he’s four but that’s just the way he is.”

Notabadbet will jump from barrier two under Pietro Romeo who should be able to give him the best run in transit.

“He’s showing us signs that he’ll be a bit above average and he’s got to step up in this race but he’s done well.”

Okay Okay is the Lee men’s next best chance in a Class 1 Handicap (1200m) after running fourth first-up at Goulburn.

She’s only run on soft or heavy tracks and Lee said he was looking forward to watching her go around on top of the ground.

“She’s a filly with ability and if you go through her form it’s not too bad,” he said.

“She doesn’t really like the wet tracks and we were forced to run her on a few.

Two runs back she ran fifth behind Rocketing By who went on to win the $2 million Inglis Millennium.

“She’ll be quite competitive. She’s got form behind a few good ones,” Lee said.

Above Reserve is the horse that needs to life for Lee in the second race over 1350m which contains a stack of horses out of form.

“She hasn’t shown too much to date so we’re hoping she can stay,” he said.