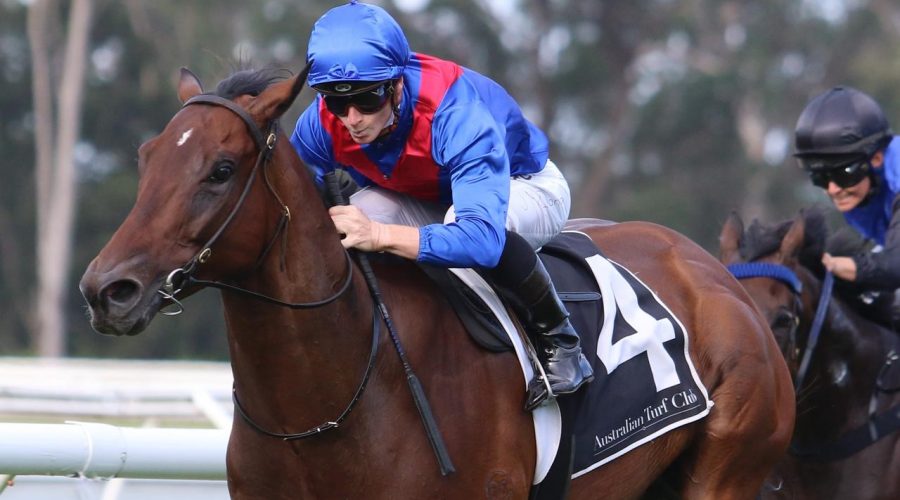 Most trainers would take barrier one any day of the week but John O’Shea is unsure how it will impact the chances of Promise Of Success in the Sky Racing Handicap (1200m) at Warwick Farm on Wednesday.

Promise Of Success, who was bred in England where she began her career with four winless starts, is protecting a perfect Australian race record after winning impressively on debut at this track earlier this month.

But O’Shea pointed out that Promise Of Success is a mare with a huge stride and she appreciated getting to the outside where she produced a powerful finishing surge last start.

“I don’t know whether barrier one is to her advantage,” O’Shea said. “She doesn’t usually step that well so she might get cluttered up.

“But she’s a nice mare and needs to go to the races so she will have a ‘burn’ around.”

Promise Of Success is the $2.20 favourite to win the Warwick Farm closer. Her main rival Ibaraki ($4.40) has drawn the extreme outside gate but his chances have been given a boost with four early scratchings which means the three-year-old will come out of barrier 12.

The Team Hawkes-trained Ibaraki also created a big impression scoring on debut at Canterbury and he has in-form jockey Brenton Avdulla to help negate the wide barrier.

O’Shea’s also optimistic about the debut of juvenile I Am Lethal in the Harry Angel At Darley Handicap (1100m).

I Am Lethal is a superbly bred colt by champion sire I Am Invincible out of Steps In Time, a brilliant sprinter O’Shea trained to win numerous stakes races.

“Steps In Time was a really good mare and she has produced a very nice horse who can hopefully live up to the hype,” O’Shea said.

I Am Lethal, purchased for $250,000 at the Magic Millions Sale, has won two barrier trials at Gosford and Randwick in recent weeks.

O’Shea said I Am Lethal’s late season debut was a deliberate tactic. “We have taken our time with him, he’s only a two-year-old and is probably ahead of schedule to be fair,” he said.

I Am Lethal is a son of John O’Shea’s former smart mare Steps In Time (pictured).Source:News Limited

“But he’s a nice horse, we have thought quite highly of him all along.

“We had him down to have his debut on the ‘Kenso’ (Kensington) but they moved the meeting to Warwick Farm so we will take him there for his first start.”

I Am Lethal has drawn out wide in barrier 11 which O’Shea admitted was not ideal before confirming plans to start the colt.

In overnight TAB Fixed Odds betting, I Am Lethal is at $6.50 in an open race where Clemenceau and Dragonstone are early favourites at $5.

The Team Snowden-trained King Of Sparta is also prominent in early betting at $5.50 and he has race experience on his side going to Warwick Farm.

King Of Sparta has had four starts this season and although he is still chasing his first race win, the gelding has run well in very strong grade including his last start fourth in the Group 3 Kindergarten Stakes at Royal Randwick during The Championships.

Meanwhile, O’Shea confirmed boom sprinter Lost And Running returned to his Randwick stables earlier this week to begin preparations for the $15 million The TAB Everest during the spring carnival.

Lost And Running, winner of six of his seven starts including the Listed Luskin Star Stakes last month, was selected by slot-holder TAB to contest The Everest at Royal Randwick on October 16.

REGAL POM TO MAKE A STATEMENT ON DEBUT

Trainer Annabel Neasham is feeling more pressure than usual ahead of Regal Pom’s debut in the Harry Angel At Darley Handicap (1100m) at Warwick Farm on Wednesday.

Neasham revealed her parents, Steve and Patricia, and brothers Alexander and Oliver are among the owners of first-starter Regal Pom.

“I gave my family shares in Regal Pom as a Christmas present so I’m feeling the pressure a bit,” Neasham said.

“With Covid, I haven’t been back to England to see my family for two years but they enjoy getting my audio updates about their horse.

“My brothers don’t mind a bit of banter and take the mickey out of me. They might say it is a good idea to scratch from a wide gate even though they have no idea what they are talking about!”

But Neasham has been telling her family and the other part-owners in the syndicate that Regal Pom has his share of ability.

Regal Pom, a bay colt by Press Statement, showed Neasham he was ready to go to the races when he ran on well for fifth in a recent Randwick barrier trial.

Neasham had Regal Pom entered for Gosford on Tuesday but decided to wait 24 hours and give the two-year-old a home-track race debut.

“Regal Pom’s only had the one trial this preparation but I thought he was quite solid to the line,” Neasham said.

“I just felt we didn’t need to trial him again so he is going straight to the races.”

Finally, what is the story behind the naming of Regal Pom?

“We wanted The Editor but it got rejected,” Neasham revealed.

“Then the next highest vote for the name was Regal Pom which suits the horse because there are a few Poms in the ownership.”

Regal Pom, who will be ridden by 2kg-claiming apprentice Louise Day, is rated at generous odds of $26 in latest betting.