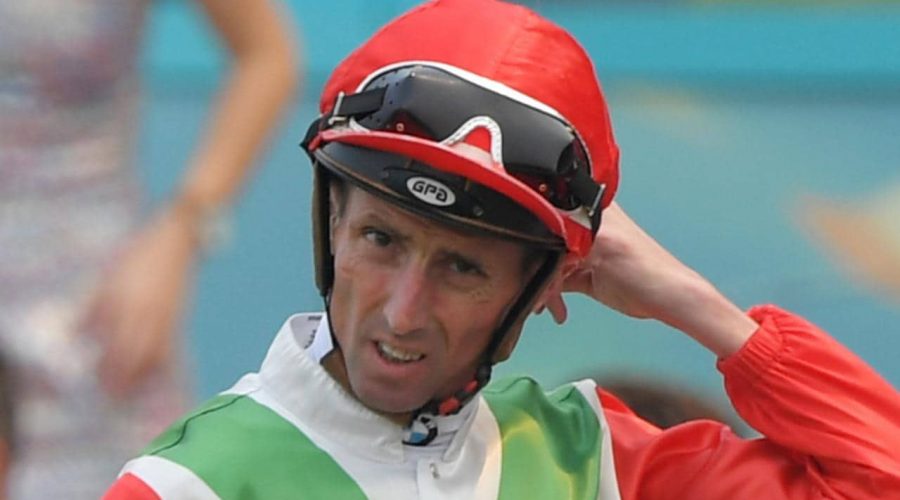 Canberra trainer Keith Dryden knows what it takes to win a Wagga Town Plate and he’s got one of the best horses he’s trained in this year’s race.

But that doesn’t mean it will be easier to win on Thursday.

The $200,000 race is one of the richest in NSW country racing and attracts a better field each year so Handle The Truth will need to run a peak performance to take it out.

Trainer Keith Dryden and jockey Nash Rawiller have enjoyed plenty of success including The Kosciuszko and National Sprint with Handle The Truth. Photo: Simon Bullard/AAP ImageSource:AAP

“I’ve won it a couple of times and they haven’t been with horses not of the class of Handle The Truth so it has got much harder to win,” Dryden said.

“If you can get one winner on this day you’re happy and if you get two you’ve had a big day. There’s no easy ones anymore.”

Handle The Truth will be ridden by Nash Rawiller for the first time since they combined to win the Listed National Sprint on March.

He ran 11th of 13 in a Benchmark 100 race over 1400m at Randwick two weeks ago but didn’t get luck when running three lengths off Rocha Clock.

Dryden put a line through it and his five-year-old is rated a $8.50 hope in a big field so the punters have forgiven him for the last result.

“He just never got a crack at them. He was boxed away in the centre there and the last couple of runs haven’t worked out for us so hopefully we can get some clear air,” Dryden said.

Shenandoah is Dryden’s best chance on Thursday if the punters know what they’re talking about.

He’s rated a $2.70 favourite in his Benchmark 66 Handicap (1400m) off a second placing last start at Canberra.

But he was a $1.95 favourite that day so he owes the punters one.

“I don’t know where all the raps come from him because they’re always backing him and so judges say he’s the best of the day,” Dryden said.

“He does keep getting beat but is always going close.”

Kermatin runs in a Class 1 & Maiden Plate (1600m) after winning in good style at Wagga Wagga over a mile.

The Kermadec filly looked the winner a long way out in that race which bodes well for the step up in grade here.

“She was impressive last start but it was obviously a lot weaker than what we’re going to meet in this race,” Dryden said.

“She’s always been a nice filly but has been a bit green. As she’s matured up she’s got a little bit better.

“I haven’t looked too much at the reply but I was happy enough with the way she went for new owners and Jeff Penza got off her and said she was a filly that would win more races.”

Mick’s Mate was down to run on Thursday but Dryden will likely hold him back for the opening event at Wagga on Friday over 1200m.

“He’s got a bit to go yet and I think he’s probably a miler,” Dryden said.

“I’d like to start him in the 1200m race on Friday and we’ve accepted in it too.

“I think he’s a nice horse and next time in he might be a really nice horse.”

Considering what Lord Von Costa has done, it’s hard to figure out why he’s an $18 chance for Thursday’s Wagga Town Plate (1200m).

The lightly-raced eight-year-old comes into the main race off two solid runs at Caulfield including a $250,000 event last start.

And a few years ago, he ran second in this race to an emerging sprinter called Santa Ana Lane who would go on to win a stack of Group 1 races.

Trainer Donna Scott doesn’t know why the punters have stayed away from her sprinter.

“I’m a little bit surprised about the price,” she said.

“I’m not saying he should be favourite but I don’t think he should been 20/1 like he has came up.

“His form speaks for itself and this has been a plan for a while with him and everything’s gone to plan so far.”

The region’s leading rider Blaike McDougall rides Lord Von Costa out of barrier two in the capacity field and he should have him just in behind the speed and stalking them.

“I’m happy with him and the gate and despite being against some nice horses he gets his chance,” Scott said.

“He knows the track and has had plenty of trials there and a few starts and always performs well there.

“John O’Shea’s horse (Southern Lad) has got great form and Handle The Truth is in there so it’s a good race and I’d like a bit of rain to hit the track because he doesn’t let down on those Good 3 tracks. A Good 4 would be fine.”

Meanwhile, Kembla Grange will host a meeting on Thursday with just over 90 horses down to run and in the fourth race second starter Papadum looks a good hope after a luckless debut when fourth at this track.

Global Queen, in the fifth race, just missed out here last start when getting beat on the line after leading and she’s won her only second-up run so look for her to go one better.