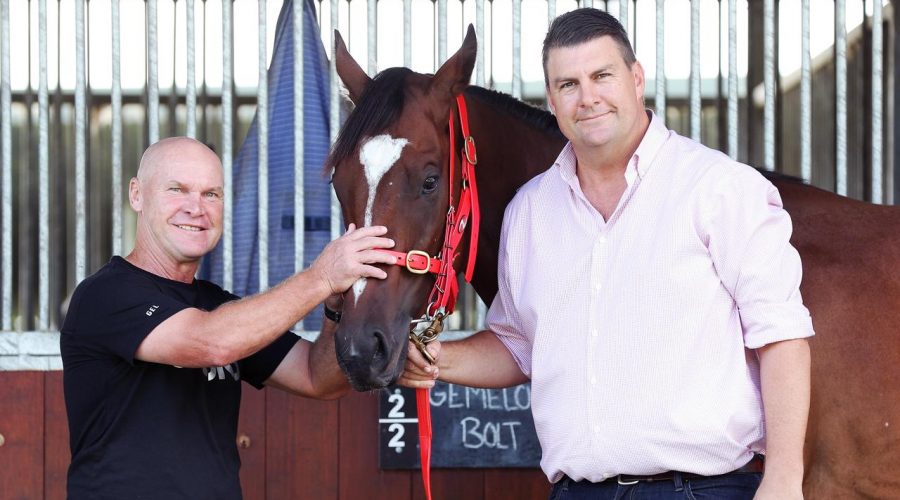 Trainer Chris Anderson only needed to look back a year to gain confidence his gelding Gemelon Bolt can cause an upset in the 2YO The Jewel (1200m) at the Gold Coast on Saturday.

On the same day Sweet Dolly won the fillies division, running a very slick 57.95. It was a half-second faster than Gemelon Bolt and ensured Sweet Dolly would run odds-on in Saturday’s race.

Michael Rodd has the ride on Gemelon Bolt in the QTIS Jewel 2YO. Picture: Trackside PhotographySource:The Courier-Mail

However, Anderson was able to look at the result of last year’s race to take heart.

Rothfire was sent out a $1.20 favourite in The Jewel but on a soft track Kisukano sailed past him to score an easy win. Rothfire went on to win the Group 1 J J Atkins and Group 2 Run To The Rose before being injured.

It wasn’t the only upset in The Jewel dating back to later Group 1 winner Tinto scoring at $17 in the first running of the race in 2013.

Anderson said in a quirk of nature The Jewel was often run on wet tracks and that had led to some upsets. He said Sweet Dolly looked a well above-average filly and would also have the best of the weights.

“It has been raining at the Gold Coast, just like last year. The track is rated heavy but even if it dries out there will be some give in it,” Anderson said. “So you never know what can happen. My bloke has gone ahead in the past two weeks.”

Gemelon Bolt is by multiple Group 1 winning sire Falvelon who has limited numbers to the yearling sales these days.

He cost $40,000 at the 2020 Magic Millions March Sales and has already proved a good money spinner for his owners, a syndicate headed by the David Giesemann.

“The Falvelons aren’t noted mudlarks but they aren’t duffers either. The best way to describe it is they get through the ground,” Anderson said.

“Gemelon Bolt is a pretty smart horse who is improving and the step up to 1200m on Saturday will also help. Michael Rodd has elected to stick with him and you don’t need me to tell you his good a jockey he is.”

It will give Rodd a chance to add another feature race win to his already bursting portfolio.

Rodd served his apprenticeship on the Gold Coast with two of his early major wins being the Magic Millions 2YO Classic on Regimental Gal and the Prime Minister’s Cup on Prized Gem.

He will also partner the short priced favourite Miami Fleiss in the 3YO The Jewel.

Anderson will wait until after Saturday to decide whether to set Gemelon Bolt for winter two-year-old feature races.

He has elected to run new stable addition Moonlight Lady, a noted wet track horse, in a Class 6 Plate (1100m) on Saturday.

Moonlight Lady, who was previously trained by Will and Peter Hulbert, was also entered for the Military Rose Plate (1200m). The mare has won all three of her starts on heavy tracks.

Meanwhile, Anderson has taken a major step in his plan to attract a younger audience to racing.

He has recruited rugby league legend Allan Langer, AFL icon Simon Black and cricket star Andy Bichel to be ambassadors for his stable. Anderson hopes the trio can interact with a wider audience and attract new owners to his stable.

The trio will also offer an insiders view of their sports with prospective owners.

“We had a very productive meeting on Wednesday and things are set to go ahead,” Anderson said.

Originally published asAnderson hoping for another upset in The Jewel

March 11, 2021 Horse Racing Comments Off on Trainer Chris Anderson is hoping for another upset in The Jewel with Gemelon Bolt
NFL News