When Roger Teal saddles Kenzai Warrior in Saturday’s Qipco 2,000 Guineas it will erase the fear he had when his first runner in the Classic, Tip Two Win, finished second to Saxon Warrior two years ago.

The Lambourn-based trainer said: ‘I was driving home from Newmarket quite happy, then suddenly thought, “That’s probably our one and only chance gone”.

‘John Gosden hasn’t got a horse in the race, so that shows you how hard it is to get a runner in the 2,000 Guineas. For a stable of our size with 40 horses, it is a major feat. But here we are, two years later, getting all the nerves again.’ 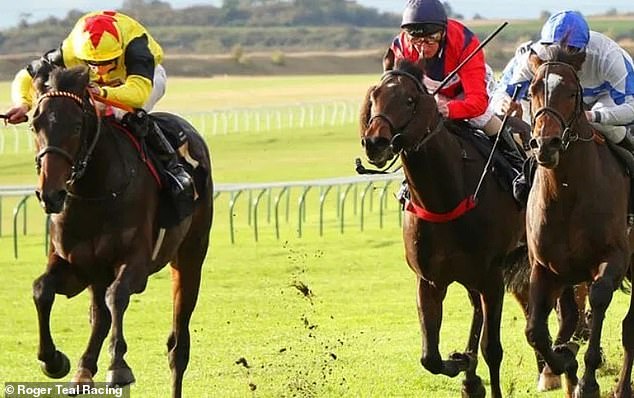 Kenzai Warrior, a 22-1 chance, goes to Newmarket unbeaten in two runs last season, including victory in the Horris Hill Stakes there, when he powered home after looking an unlikely winner a furlong out.

Teal says the colt is different physically to Tip Two Win but similar in one way. ‘They both show a good attitude, are tough and determined,’ he said. ‘The experience with Tip Two Win is invaluable. We know what we have to do.

‘Kenzai Warrior is a galloper rather than a speedster. He clicked in with half a furlong to go in the Horris Hill and finished strongly in difficult conditions, so that stands us in good stead.

‘They are going to go quick. They always do in the Guineas. As long as he can get into a rhythm and keep balanced, he will be finishing when he reaches the rising ground.’

The disappointment for Teal, who moved into a new stable in December, is that Kenzai Warrior’s owners, Rae and Carol Borras, are not allowed to attend.

He said: ‘This is probably going to be their only chance of a runner in the Guineas, so we’ve just got to hope Kenzai Warrior runs a big race for them.

‘My owners have been absolutely brilliant. We took a jump to a bigger yard with more expense and then lockdown happened. I was thinking, “Oh my God, what have we done?” They stuck with us and kept their horses in training even though there has been no racing.’

Standing in Kenzai Warrior’s way is unbeaten odds-on favourite Pinatubo. Teal said: ‘Pinatubo is a superstar. We all know the task ahead of us but if we can get our horses there fit and well on the day, anything can happen.’

Quadrilateral, last season’s Group One Fillies’ Mile winner, heads the 15 entries for the race, with Charlton sounding a note of caution about the daughter of Frankel.

He said: ‘We’ve had the driest May on record, which has not made life easy. Ideally, it would have been nice to have a prep race but otherwise she looks really well and is in good heart.