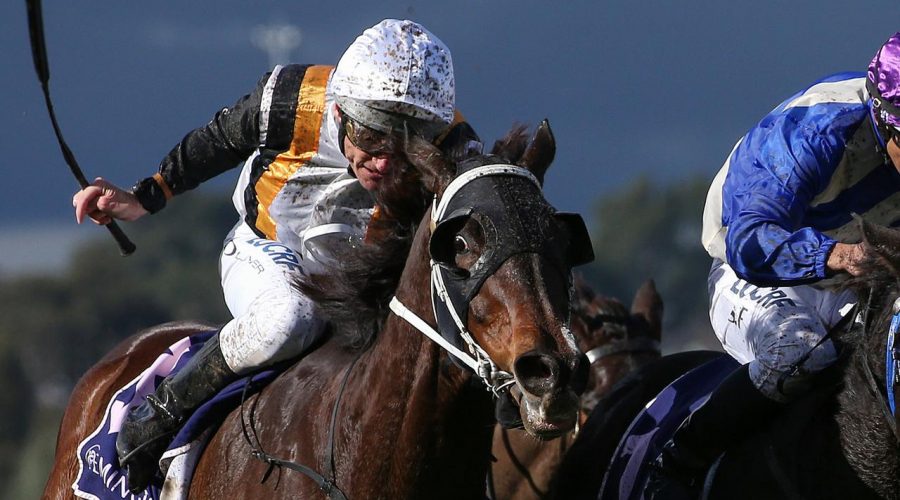 Not for the first time Chouxting The Mob will defy the odds on Saturday and complete a second comeback from a would-be career-ending injury.

The gritty stayer cheated death the first time when trainer Simon Morrish and mostly Perth-based owners opted for surgery in 2017 to mend a clean break of the cannon bone.

The cherished stable “warhorse” repaid the faith, going on to win seven of 25 career starts, culminating in a brilliant third in the Group 2 Adelaide Cup last year.

But shortly after the peak effort, potentially even during, the seven-year-old sustained a tendon injury.

Owners again elected to “throw a few bucks” at the problem, with Morrish sending Chouxting The Mob to Cranbourne horseman and revered tendon guru Lee Everson.

“But he’s a good stayer and they’re hard to find … and to Lee’s credit, touch wood, touch everything, to this stage he appears to be 100 per cent sound.”

Chouxting The Mob will return to the races for the first time since March 2020. Picture: AAPSource:AAP

After a rigorous nine-month bootcamp with Everson, doing “miles and miles and miles of rehab work”, Chouxting The Mob went to the paddock “ridiculously fit” to begin a well-earned four-month break.

Slow work and multiple jumpouts has conditioned Chouxting The Mob the past two months, but a trial win at St Arnaud recently was the decisive action.

“I said to the ownership group, ‘No point kidding ourselves, we need to take the cotton wool off, take the gloves off and put a bit of pressure on him’, which we did,” Morrish said.

“He’s come through that really well, we won’t give him an arduous campaign (this time). We just want to make sure he’s back as a competitive racehorse and let him guide us where we end up.

“He’s a been a great servant and hopefully the journey can continue … I just want him to run well and pull up well. If he comes through the race sound that’s a big box ticked.”

Jockey Declan Bates has a hard time putting a ceiling on Corner Pocket — ahead of their bid for six wins in a row — because the untapped sprinter-miler only ever does what he needs to.

After winning a Hamilton maiden and Class 1 at The Valley last year, the four-year-old son of Toronado, who started his career with two placings, extended the streak at Ballarat, Warrnambool and Sandown.

While past performances matter not on Saturday at Sandown, Bates has the benefit of experience winning six on the bounce in 2019 aboard eventual Group 1 winner Begood Toya Mother.

“He’s a hard horse to assess because he’s so laid back, he’s never going to come out and destroy opposition, he wins races doing as much as the jockey asks him,” Bates said.

Corner Pocket is going for six in a row. Picture: Racing Photos via Getty ImagesSource:Getty Images

“I’m not saying Corner Pocket is going to get to that height (Group 1) … it will be interesting as he steps up in grades what height he will get to.

“(Trainer) Lindsey (Smith) has done a really good job, hasn’t set the bar too high, each time he’s raced he’s gone to that next grade up and that’s played a big part in being able to win.”

Warrnambool-based Irishman Bates is one of multiple jockeys this weekend committed to rides at both Swan Hill and Sandown on consecutive days.

After four rides at Swan Hill on Friday Bates will travel to Sandown on Saturday for three mounts, ahead of a return to Swan Hill for six engagements on Sunday.

“I’ve got good rides Saturday so I wasn’t going to miss them,” Bates said.

“Got some good rides each day, so I’m happy to do that (travelling).

June 11, 2021 Horse Racing Comments Off on Sandown: Chouxting The Mob defies odds again to make it back to the track
NFL News