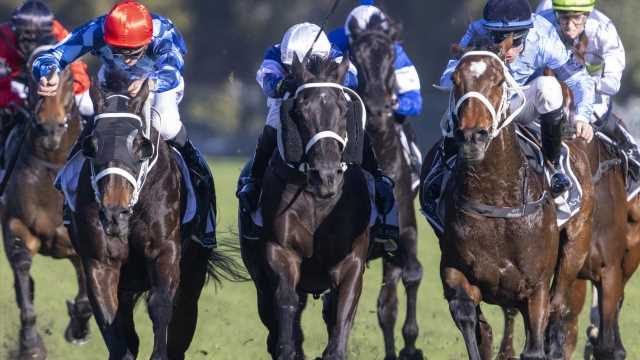 The Daily Telegraph racing editor Ray Thomas and Sky Thoroughbred Central’s form expert Ron Dufficy discuss the chances on the nine-race program at Rosehill Gardens on Saturday and also in the final Group 1 race of the season, the Tatt’s Tiara at Eagle Farm.

Ron Dufficy:Key is at each way odds but I think she has a great chance. Her first-up run in the Denise’s Joy Stakes was outstanding then she had excuses last start. She is nicely drawn and I’m expecting a very good run from her. Sahra did beat Kobe Rocks on a heavy track in May and her form is solid. I can’t leave out Kobe Rocks, winkers on, good wet track winner last start but loses James McDonald and has a big weight. Major Artie has had two trials so he should be ready and he won three races last campaign including two on soft tracks.

Ray Thomas: I liked Major Artie’s recent trial, he does look quite forward and 1300m first-up is ideal. Drawn to get control of this race and will take running down. Queen Bellissimo faces a sharp rise in class but she has won three of her four starts and is a progressive type. Imposing Beau is showing promise in his debut preparation and Resilient Star will be finishing hard.

Dufficy: This is the keenest I’ve been in a Highway for a while with Monterey Zar. He’s a nice type and produced an encouraging class 3 Highway run last start, he’s very well weighted with Tyler Schiller’s claim and he only has to run 1400m to prove hard to beat. Packer’s Bond caught the eye charging home over an unsuitable distance first-up. The wet track and 1400m suits. The Drover is a consistent type with good soft form. Statesville has been disadvantaged by wide draws but he could go forward here in what looks a slow race and should run well.

Thomas:The Drover came from a long way back on the turn and finished strongly to claim second in a Highway over 1500m last start. He drew wide that day and had to go back early but from the better draw, he should be able to settle in the front half of the field and be very hard to hold out. Zoo Station showed ability in her debut preparation last summer and watch for her late. I also expect Montery Zar and Statesville to be very competitive.

Dufficy: I know he has a lot of weight and it will be tough but I just feel this is a perfect race for Sweet Thomas. He has had the 3200m lead-up, he is a specialist over the distance and should be in the finish. Kaapfever loves it wet, stays well and won’t know himself with 50kg. He has to be hard to beat. Terwilliker is slowly getting back to form and he makes his own luck controlling the speed. Feel The Rush had excuses last start when he made an early move and the wet track is a positive for him as well.

Thomas:Sweet Thomas is a genuine 3200m horse – and there is not many you can stay that about. He excels at this trip and his last start Brisbane Cup minor placing indicates he is ready to win. Kaapfever does look very well weighted and just has to run the trip to be in the finish. I noticed Notabadharada hitting the line well last start, he’s a tough horse and a lightweight chance at odds. Mr Satchmo can improve now he is up in distance.

Dufficy: This does look a lovely race for Zing. She has Saturday form against a lot of Wednesday form here and with the good draw she should carry the weight and prove hard to beat. Our Intrigue is an ex-Kiwi mare having her first run for Chris Waller. She has had a nice easy trial in Sydney. So Wicked is in good form and carries weight well. Savigne had five weeks between runs before her last start effort and has improvement to come.

Thomas: It’s hard to tip against Zing, Ronnie. She has been racing well this campaign with three successive placings from as many attempts, but this is her race. She should get the right run from her inside draw and the heavy track is no issue. The Chris Waller stable is set to dominate this race with So Wicked, Savigne and Our Intrigue to chase stablemate, Zing, to the line.

Dufficy:Wairere Falls deserves to win another race. He backs up from a good effort last week, he is meeting a lot of horses with Wednesday form so if he holds his form he should win. Cadenabbia is a three-year-old who had excuses after missing the start last time and he has upside. Knight ran a much improved race at Warwick Farm and when he finds form he usually holds it. Serena is not the worst long shot, I’ve liked the way she has been hitting the line of late and she is ready now.

Thomas: I concede Wairere Falls looks the obvious choice here but at the odds I am leaning to Knight. He’s a tough galloper who makes his own luck on pace and his last start effort indicates he is close to top form again. Knight gets to his favoured 1600m trip and will give his backers a great sight. Maccomo gets in well at the weights after the claim and he is another racing in good form. Wairere Falls is bursting to win a race and gets his chance here. Cadenabbia is an improver.

Dufficy: This is a tough, open race. I want to be with Bandersnatch here. He was far from disgraced second-up, he likes this track and distance, he’s been kept fresh and should get a nice on-pace run. Threeood is a real mudlark who was terrific at big odds when resuming in Queensland and she produced a very good trial effort since. Tricky Gal is a good mare when right. I expected a touch more last start but she is too good to dismiss on one run. Wandabaa is going well without winning but has to jump from 1100m to 1400m which is a slight query.

Thomas:Threeood ran a blinder when resuming behind quality mares Exhilarates and Sweet Deal in a stakes race at Eagle Farm, she races well second-up and excels on heavy tracks. Wandabaa never runs a bad race and deserves to break through this campaign but the 1400m will test her stamina reserves. Bandersnatch is close to his best and Ranier will be finishing strongly. Tricky Gal also rates highly in an open race.

Dufficy:Opacity has found his form now, he beat a very solid field third-up. I know he rises 5kg but this race is nowhere near as strong as what he beat last start. With his claim, I think he fits in well. Great House is an up-and-coming import who got the job done first-up and he has more to come. Mubariz is going great with successive wins and he maps well again. Brutality has had a busy schedule backing up three weeks in a row but is always a chance on a wet track.

Thomas:Great House was very impressive when resuming at Rosehill and can only improve. He’s lightly-raced but very promising and his best effort last campaign came second-up at Rosehill when he got out to a middle distance. Mubariz is racing in confident, dominant form. Opacity is back to his best and enjoys these wet track conditions. Brutality is a top four chance.

Dufficy: I’m pretty keen on Ulysses, Ray. He had too much to do when dragged back from a wide gate first-up and from a better draw he can race closer and is ready to win. Blondeau is the danger. He has lacked a killer punch since his brilliant first-up win but he is a definite chance. Mirra Vision is going well this preparation, drops in class and just needs luck to secure the right run from her draw. Exotic Ruby has been going well without much going right this preparation and looks over the odds.

Thomas:Ulysses did catch the eye when resuming, he does very well second-up, and is suited over this trip. He should get the right run from his favourable draw, too. Blondeau is likely to get back from his wide draw but he is capable of finishing fast. Canasta makes his own luck up on the speed and this race sets up well for him. Mirra Vision is a genuine type and should be competitive again.

Dufficy: I’m tipping another bolter in Snowzone. He’s a good wet-track and was terrific first-up then over-raced when wide the other day. From a better draw with the blinkers off and back to 1100m you are going to get a really good run for your money at massive odds. Hulk is a good chance, obviously. He is busting to win another race and this is suitable. Not Feint Hearted is a huge query resuming after 300 days off but I liked the way he trialled recently and he does have two heavy track wins to his credit. Joviality is going to get back from the wide draw but expect a booming finish.

Thomas: I’m also going very wide with Switched. She didn’t beat a runner to the line over 1200m last start but led for a long way and was only two lengths from the winner on the line. Back to 1100m is the key and she runs well on heavy tracks. She is great value at $21. Destination was stakes placed behind Wild Ruler (Forbidden Love third) last spring which is great form for a race like this. He’s resuming here but showed enough in his recent trial to suggest he will run well. The consistent Hulk will be charging home and Triple Ace has ability.

Dufficy: I am leaning to Subpoenaed another chance. She got caught off the track in the Stradbroke but I thought she did more than enough. I liked the way Odeum ran last start and she has the James McDonald factor. She should be around the mark. Nudge is absolutely airborne this campaign and could easily go on with the job. No knock on Tofane, the Stradbroke winner who is a proven big-time performer well in with the set weights.

Thomas: I’ve also found Subpoenaed. It just didn’t work out for her in the Stradbroke but her effort to finish a close fifth was very good. From barrier two, she will get the right run this time. Tofane is back to her best and is well placed at level weights. Nudge is in career-best form and Savatiano is a top class mare, she trialled brilliantly last week but needs luck from her wide draw.

Maher/Eustace colt who has finished circa 5-lengths behind In The Congo and then Ibaraki at his only two runs. Back in grade and peaks for this.

Locally trained gelding who was a nose off being a city winner at his first campaign. Beat one other here first-up but was closing fast at the finish to get pretty close.

John O’Shea-trained Savabeel three-year-old that bolted in to win his 1800m maiden at Hawkesbury then was ‘only’ 6-lengths off Wicklow in town after that.

Alysha Collett rode five winners at the last Newcastle meeting – how many can she get home here? Surely a few.