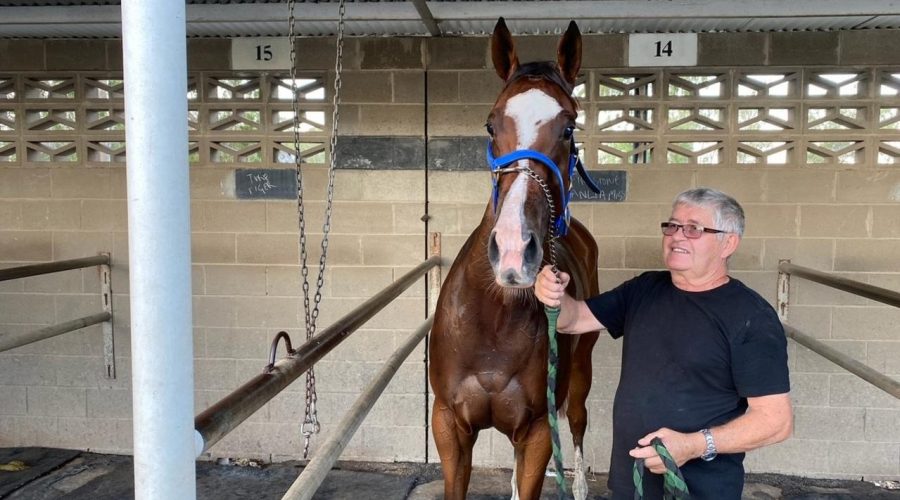 The trainer of Rockhampton rocket Sweet Dolly insists the prospect of a significantly rain-affected Gold Coast track holds no fears for his unbeaten filly in the $500,000 QTIS Jewel 2YO on Saturday.

Sweet Dolly has taken all before her in three career starts, blitzing her rivals by six lengths on debut in Townsville before winning the Listed Calaway Gal Stakes and then last start putting a gap of almost five lengths on her rivals in the Jewel Prelude on the Sunshine Coast.

The filly who was purchased for just $1500 as a weanling appears to have the Jewel 2YO at her mercy and is set to start a short-priced favourite.

On Tuesday, the Gold Coast track was rated a heavy (8) and there was up to 15mm of rain forecast on the coast on each of the following three days.

But Hansen, who will float Sweet Dolly from Rockhampton to the Gold Coast on Wednesday before the filly has a gallop on the track on Thursday, says a bog track would almost certainly not be an issue for the daughter of Real Saga.

“It is not going to worry us at all if the track is really wet,” Hansen said.

“She should handle it fine because she is by Real Saga out of a Canny Lad mare and they get through it pretty well.

“Having said that, I guess you never really know unless you out them on a really wet track.

“Everything is well with her, she pulled up good after that last run and she has trained on well.”

Such has been the style and substance of Sweet Dolly’s three wins that some have suggested she wouldn’t have been out of place in the Golden Slipper.

But Hansen has never second guessed himself about targeting her at a restricted race on the Gold Coast rather than embarking on an ambitious Sydney campaign.

“Not one little bit of me wishes I had sent her to Sydney, at this stage of her career it would have taken a lot out of her,” Hansen says.

Chris Anderson’s two-year-old gelding Gemelon Bolt, who won by close to three lengths on the Sunshine Coast last start, will be one of Sweet Dolly’s key rivals in the Jewel 2YO.

But even Anderson concedes that with even luck Sweet Dolly could be close to a good thing.

Anderson feels there is every chance Gemelon Bolt will be racing for second.

March 9, 2021 Horse Racing Comments Off on Rockhampton filly Sweet Dolly to take the $500,000 QTIS Jewel 2YO on the Gold Coast by storm
NFL News