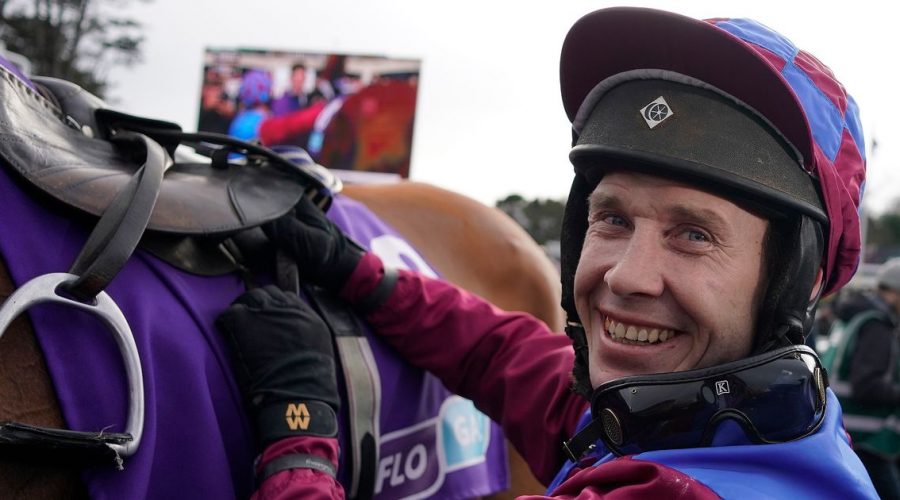 The four-time champion jockey, 43, has competed at the Cheltenham Festival since 1995 – and he has no intention of packing away his saddle just yet.

His first success on Anzum in the 1999 Stayers' Hurdle is one of 23 triumphs, which include the following year's Gold Cup on Looks Like Trouble, a horse happily retired with him at the age of 29.

"I'm loving what I do and when you're riding for especially Philip Hobbs it makes things very enjoyable and lots to look forward to," Johnson said in a call hosted by Great British Racing.

"I'm thinking about Thyme Hill, if he does go over fences in the next year he could be in the Gold Cup in two years' time.

"So there's always lots of horses, you're always thinking what they're going to be doing in the future."

Johnson has had 70 winners this season, as Brian Hughes, Harry Skelton and Harry Cobden are separated by just seven at the top of the jump jockeys' championship.

"I think it's going to be a very, very close thing," he said, suggesting Harry Skelton might just have the edge due to his support from his brother, trainer Dan Skelton.

"I think it will go down to probably the last week of the season, because Brian Hughes has lots of different trainers he rides for regularly and the two Harrys predominantly the two main yards.

"They are going to have a very busy six weeks."

It was very, very frustrating at Ascot. Everything had gone perfectly and apart from the last three strides when Paisley Park came by me it would have been a perfect result.

But he has showed, when they make that change from novice company to graded company you never quite know if they are going to able to get to that point and he has shown he has – and his two runs this year have been fantastic.

It was always the plan to go straight from Ascot to Cheltenham so this is what we have been aiming at. I think the slightly better ground might just help us a little bit and again he has only had six runs over hurdles, so I think he's hopefully still improving.

We've definitely got a fair idea of what we want to do and how we'd like the race to be run.

He's got the right profile and I still think there's more improvement to come. I can see him winning the Stayers' Hurdle.

He's obviously a very good horse and I was impressed with him at Sandown.

He's in very good form at home, he schooled at Exeter Racecourse ten days ago and again this week at Philip's.

The ground we thought it was sensible to give him both options depending on what it's going to be.

Unfortunately neither race is going to be an easy option, you've got two very hot favourites in both races.

After Sandown he showed he is very, very good and hopefully there is more to come.

It's a lovely ride to pick up and obviously it's a shame Callum (Bewley) is not able to ride him.

His form is very solid, he's high in the weights because his form is so good but he's one of the class horses running in the Ultima and I think he goes there with a really strong chance .

He unfortunately fell at Cheltenham in December coming down the hill three out but he was going really well at the time.

He's only a novice but he has followed Allmankind around Warwick, he was a good winner at Newbury.

I think novices have got quite a good record in the Grand Annual, you are looking for those horses that are still on that upward curve.

I'd like to think he goes there with a big chance on the Wednesday.

He won the Gold Cup and the following season – whether that hard season took it out of him I don't know – but he definitely didn't quite show his true form and he was nine lengths behind Al Boum Photo, when he was fourth in it, and he definitely didn't feel himself that day, so I don't think there's a huge gap to bridge.

After Sandown the other day, the way he travelled, the way he jumped, his enthusiasm. As long as the ground is on the slower side, I think he goes there with a huge chance and I wouldn't swop him for another one.

Obviously Al Boum Photo is the one to beat and you don't quite know how good Champ is because he's relatively inexperienced but they'll have to put a good performance in to beat Native River.