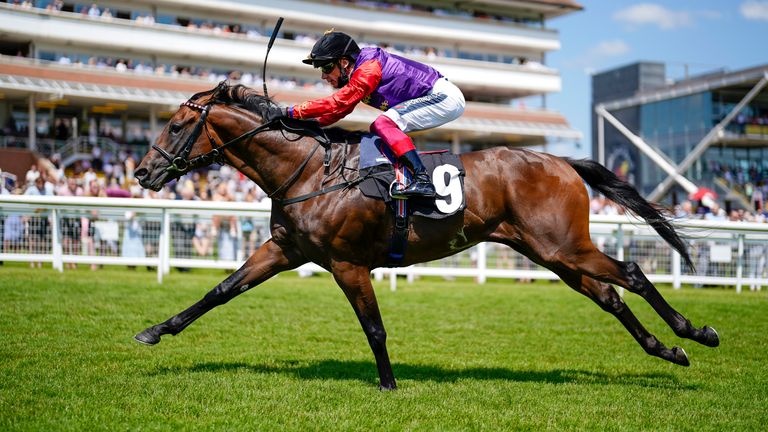 Royal Ascot runner-up Reach For The Moon carried the colours of the Queen to an impressive victory in the second race at Newbury on Friday.

Trained by John and Thady Gosden, the son of Sea The Stars came close to providing Her Majesty with a winner at last month’s showpiece meeting – going down by just half a length to Aidan O’Brien’s Point Lonsdale in the Chesham Stakes.

Having also filled the runner-up spot on his racecourse debut at Yarmouth in May, Reach For The Moon was the 2-9 favourite to make it third time lucky in division two of the bet365 EBF Novice Stakes and the result was scarcely in doubt.

Always travelling strongly in the hands of Frankie Dettori, the youngster moved smoothly to the front over a furlong out before rocketing four lengths clear of Harrow.

Gosden senior said: “He was entitled to do that but there was no pace and he quickened well, that will bring him on.

“He’s a grand colt and we’ll look towards the Solario with him now.

“We could have gone straight into another Group race, but you can see he’s quite playful – we’ll leave it at that! To that extent we’ll look for a race in August and the Solario is a nice race.

“He’ll get further. He’ll be comfortable over a mile this year and over middle distances next year because he switched off with no pace today. Frankie wanted to take a lead today.

“In the Chesham, there was a strip of ground from his draw in two and I told Frankie to stay straight, so he raced on his own in the Chesham.”

July 16, 2021 Horse Racing Comments Off on Reach For The Moon shines to win at Newbury for the Queen after Royal Ascot second in Chesham Stakes
NFL News