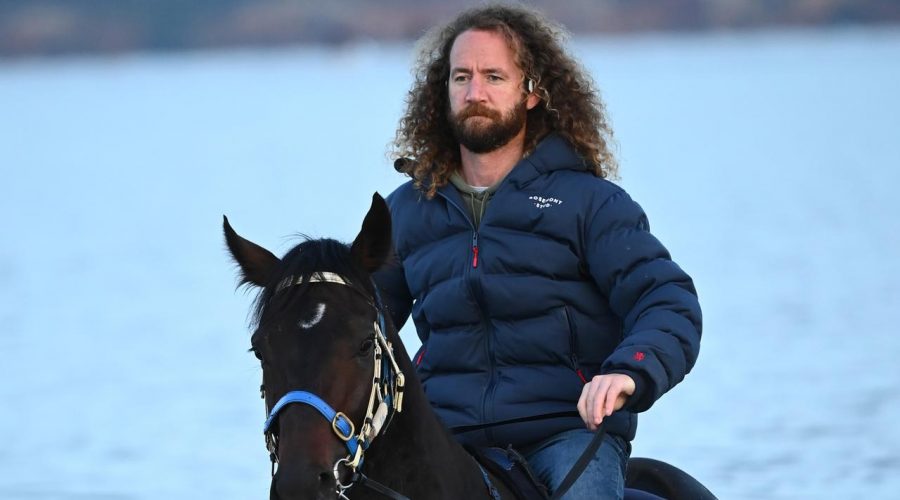 The Daily Telegraph’s Racing Editor, Ray Thomas, is keen on a two-year-old daughter of Choisir to kick the day off on a winning note at Canterbury.

Santorini Sun made a pleasing debut when she ran on powerfully for a close third over the Canterbury 1250m course. Ridden conservatively early last start but expect her to settle a little closer in the run this time. With improvement from her first start, she will be hard to beat.

Onemore Sapphire is racing in good touch including his last start second over the Canterbury 1900m when he followed the winner, Rules Don’t Apply, through the race and might have been a little unlucky not to have to run that horse down. Onemore Sapphire handles wet tracks and finds himself in a winnable race.

O’Mudgee is taking on a very competitive field but he will be hard to beat. He will get every chance from barrier four and is coming off a good effort in Saturday grade at Randwick into a more suitable race.

John O’Shea is represented by first-starters Tavi L’Amour (race 1) and Bend The Knee (race 2), who have both trialled well, and the underrated Mr Gee (race 4).

James McDonald rode four winners at Kensington last Wednesday, backed it up with a brace at Rosehill on Saturday and can continue his winning momentum with five good rides at the Canterbury meeting. They include Barrichello (race 3) and O’Mudgee (race 6).

THE INSIDE MAIL FOR CANTERBURY

Santorini Sun, a daughter of the reliable Choisir, bounds into this race off an eye-catching debut effort when closing late for third to Divinia over the Canterbury 1250m course. She is staying at this trip which is a slight concern but should take natural improvement from her first start and will go close. Miss In Charge had to be eased off heels in the straight and took a few strides to regain her balance and momentum before finishing strongly for third at Warwick Farm when resuming. She’s drawn to get the right run and will probably be in front of Santorini Sun on the turn. Franschoek is a daughter of four-time Group 1 winner Guelph, herself the dam of stakes winner Encryption. Franschoek flopped on debut earlier in the season but there was a lot to like about her recent Hawkesbury trial effort. Tavi L’amour is from the in-form John O’Shea stable and has shown potential in two trials.

Confiscate has had two barrier trials this month, the latest when he hugged the rail and ran on under a tight hold to just miss catching the speedy Silver Thorn in a Warwick Farm heat on the synthetic track. The Team Hawkes-trained colt is out of a Not A Single Doubt mare so he is bred to handle the wet track conditions. Minsk Moment monstered his rivals in a Rosehill trial then didn’t have a lot of galloping room when third in another heat at the same track. First starter from the Chris Waller stable and rates highly. Garmish has shown natural ability to win both barrier trials and should run well. Expensive Magic Millions yearling purchases Insurgence ($825,000) and Sword Point ($750,000) have shown enough at the trials to suggest they will be competitive.

Barrichello made a wide run from near the 600m and looked set to win before finishing the closest of thirds last start. Both his runs have been over the Canterbury 1250m and he is working up to a win. Significantly, champion jockey James McDonald stays with the three-year-old. Electric will make a race of it with Barrichello. Electric made his debut at Warwick Farm and he was just held up for a vital stage in the straight but when clear and balanced, he picked up generously late. Drawn out in barrier seven so will need a touch of luck early finding a position. Vanilla Sky was beaten as an odds-on favourite on debut, being run down late when third at Newcastle during autumn. Resumes here off a very good Rosehill trial where he was ridden more conservatively early and the filly was strong through the line. I’m Gunna Cashew hasn’t been far away in his two starts.

Onemore Sapphire came from near last on the turn and stormed home to just miss running down Rules Don’t Apply over the Canterbury 1900m course two weeks ago. He’s rock-hard fit, racing in very good form, and is effective on heavy going so he ticks a lot of boxes. Kutayha must be hard to beat if he backs up. He was game when third to No Compromise and Lackeen in Sydney Saturday grade at Rosehill last week and back at the midweeks he’s dropping in class. Savvy Legend was baulked in the straight but did very well to recover and surge through the pack to win at Newcastle. He’s up in grade but if he handles the rain-affected going he won’t be far away. Roseirro kept working to the line near the rails when beaten a length into fourth placing behind So Wicked at Kensington last week. Genuine galloper in a suitable race.

I don’t think there is much between Miss Fox and Eight Diamonds. Perhaps Miss Fox’s race fitness will give her the edge. Miss Fox has been improved by two runs from a spell and finished powerfully to beat all but Irish Angel at Canterbury two weeks ago. Irish Angel has since run very well in Sydney Saturday grade to enhance the form. Eight Diamonds will be hard to beat. She won first-up at Canterbury when last in work and Team Hawkes gave her a chance at Group 1 level last campaign. She ran on well in a recent Warwick Farm trial, resumes here and has a touch of quality about her. El Cohete beat all but Fastconi here two weeks ago and is close to a win. El Buena has been freshened since missing a place at Kensington two months ago but prior to that run he did win first-up on this track.

Toughest race on the program. O’Mudgee has held his form over an extended campaign and comes to Canterbury after his closing fifth to Cisco Bay at Randwick in Saturday class. O’Mudgee got through the soft 7 rating quite well last start and should be able to handle a heavy track. Drawn to get the right run and is another very good ride for McDonald. Confessed is an emerging filly who ran through the line to win by a comfortable margin at Newcastle. This is tougher but she has ability. Jungle Book didn’t get into the race when unplaced behind So Wicked at Kensington last start and is worth another chance. Altimeter is also better suited back at the midweeks. Either Yukon or Greek Hero can win this if they find their best form.