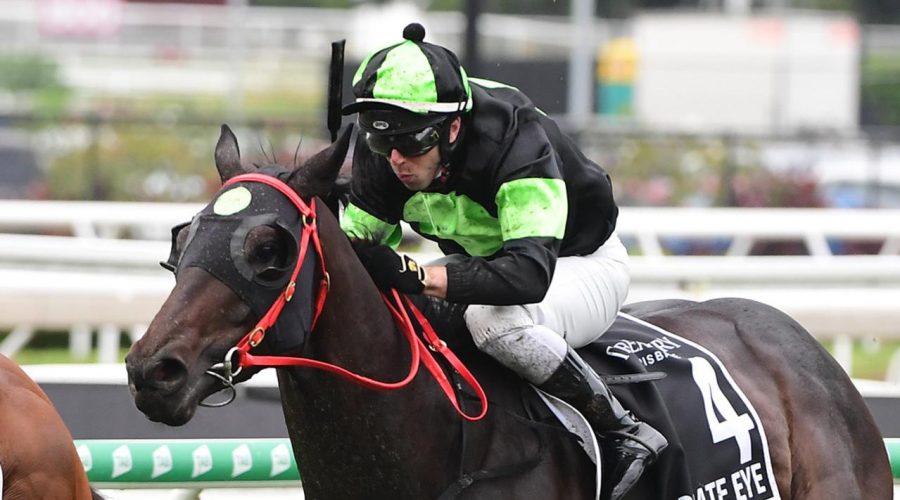 The Golden Eagle, the Stradbroke Handicap and even the Queensland Derby were all mentioned as potential future options as X-factor galloper Private Eye snatched victory from the jaws of defeat at Eagle Farm.

Joe Pride certainly has some thinking to do, for both the Queensland winter carnival and beyond, as three-year-old Private Eye did what jockey Brenton Avdulla thought was impossible in winning the Group 2 Queensland Guineas (1600m).

“I was under hard riding before the corner and I thought it was going to be a waste of time to be honest,” Avdulla said.

“I just gave him his chance and got him to the outside and once I put him under a fair bit of pressure I felt him respond.

“But they were two different horses, the one I had before the corner I was going to run last and once I got him to the outside he finally did his job and did it well.

“He just seemed to not travel at his best for me throughout.

“He is very laid-back and very casual.

“I’ve got no doubt his trainer could send him to a Derby because he just relaxes so well, but I never tell Joe what to do with him.”

From last to first! Private Eye runs down Apache Chase to win the G2 Queensland Guineas for @PrideRacing under @BrentonAvdulla! 👏 pic.twitter.com/vfxXcPMmtL

Pride, who will be front and centre again in Brisbane in a fortnight with Doomben 10,000 favourite Eduardo, wouldn’t discount trying to make a bid to get Private Eye into the Stradbroke Handicap.

Next season, he thinks the $7.5 million Golden Eagle at Rosehill would be an ideal target.

In the meantime, it’s nice to have plenty of options.

“This is kind of the way he races, his pattern is to come under pressure and then continue to chase,” Pride said.

“This horse has got a really good future, he is lightly raced and he goes well on wet or dry.

“I’m not going to say the world is his oyster but he has plenty of options going forward.

“I haven’t ruled the Stradbroke out at all, if I could get him there.

“I’ve got it in my mind, but because I would have to win something to get him in the Stradbroke and bring him back, I’m just not too sure.

“I certainly think he would be a good type for the Golden Eagle.”

Guineas favourite Apache Chase had to do some work early and was softened up in the run but tried his heart out to finish runner-up for birthday girl Desleigh Forster.

Miss Hipstar wasn’t on her best behaviour in the barriers but showed she was one of Queensland’s best young horses and could even be set for a Group 1 target with her strong win in the Listed Dalrello Stakes at Eagle Farm.

Jockey Larry Cassidy has always held two-year-old Miss Hipstar in the highest esteem but everything went wrong in the Gold Coast Magic Millions Classic in January when the filly was four-wide without cover in a forget run when she finished ninth.

Put away for a Queensland winter campaign, Miss Hipstar had to dug deep and fend off some late challenges when winning the Dalrello after being put in the perfect spot in the run by Cassidy on Saturday.

This was a 1000m dash but Cassidy, who after riding Miss Hipstar in the early days even thought she could develop into an Oaks filly, has little doubt she could run the 1600m of the Group 1 JJ Atkins if trainer Kelly Schweida chose to set the bar that high.

Miss Hipstar backers were smiling as she won her third race from five starts but Cassidy revealed there were some nervous moments before the start.

“She sometimes gets a bit fidgety but it’s her saying she is ready to go – but today there was another horse playing up and maybe that upset her because from the moment she went into the barriers she was just being annoying,” Cassidy said.

“And then she almost got her head under the front of the barriers, it wasn’t ideal.

“The whole time she was in the barriers, she was crushing my foot.”

Glad the Magic Millions horror show is long behind him, Schweida was delighted to see her talented filly bounce back in style.

It bought up a race-to-race double for Schweida who won the previous race with Slow Hands.

“She has only had one jumpout since January, I put a bit of trust in her that she has got a bit of ticker,” Schweida said.

“The pleasing thing about this is Larry has ridden a lot of good horses and when you talk to him about her, he starts to get excited.

“For sure I would love to run her in the JJ Atkins if she could run the distance, she’s a big girl.”

Originally published asFrom last to first in blink of an Eye