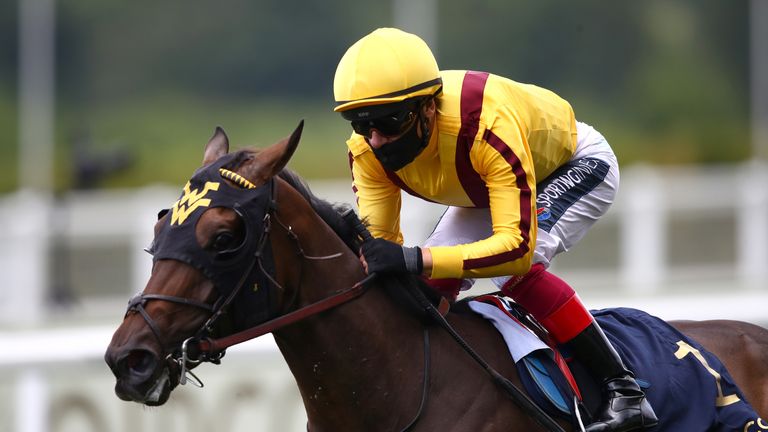 Wesley Ward will consider future plans for Campanelle after she returns to America following a disappointing afternoon in France.

The daughter of Kodiac completed a Royal Ascot-Deauville double last summer, following up victory in the Queen Mary Stakes with a Group One win against the boys in the Prix Morny.

Having won the Commonwealth Cup in the stewards’ room at Ascot this year, Campanelle returned to Deauville for the Prix Maurice de Gheest, but her race was over almost before it began – rearing up when the gates opened and hitting jockey Frankie Dettori in the face.

Campanelle soon made up the ground she had lost, but weakened to finish last of the 12 runners.

Ward said: “When you’re beaten fair and square it’s kind of easy to take, but it’s a little tough when things worked out like they did.

“Frankie obviously bumped his head and said it left him half-dazed for the first part of the race. He did well to stay on and at least he is OK and the filly seems fine.” The Washington-born trainer admits his confidence was high pre-race, with Campanelle’s stablemate Twilight Gleaming – runner-up in the Queen Mary in June – claiming Listed honours at Deauville the previous afternoon.

But Dettori felt his mount became upset before Sunday’s feature, with French rules meaning she was not accompanied to the start by a pony as she would have been in America and was at Ascot.

“The other filly that travelled over with her won the previous day and they both had around the same timeline (having not run since Royal Ascot), so we were kind of having big hopes,” Ward added.

“The American horses are used to going to the start with a pony and it certainly helps them settle. It’s quite unfortunate in France that they don’t allow ponies.

“She was able to win the Morny last year (without a pony), but she was just two and now it’s a little more difficult.

“She came out of it well, so we’ll get with the owners and make a new plan and see what we’re going to do.”

As for Twilight Gleaming, she is set to be prepared for the Breeders’ Cup Juvenile Turf Sprint, a race Ward won with the speedy Golden Pal last season.

Ward said: “She’ll head back home with Campanelle and we’ll get ready to run in the sprint against the boys at the Breeders’ Cup.”