James Harron believes Nature Strip has the speed x-factor to give his slot a second win in The Everest in three years in the $14 million race at Randwick on October 19.

Harron signed the two-time group 1 winning sprinter to his slot on Wednesday to the delight of his trainer Chris Waller, who already had Arcadia Queen in The Everest. 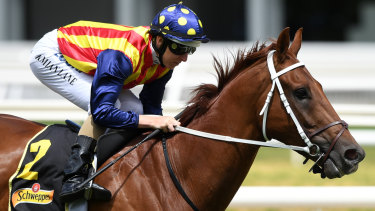 Nature Strip will run in the James Harron slot in The Everest after winning the Moir Stakes Credit:AAP

"He’s a horse with a bit of x-factor, and importantly for us is proven on all track conditions and is an on-speed runner in a race which so far looks lacking in such types so he should go into the race with a great chance," Harron said. "We have been playing a waiting game and the time came to make our move. Nature Strip is one of the most exciting and talked-about sprinters in the country."

Harron and his syndicate enjoyed success with Redzel in the first running of The Everest before taking Vega Magic in 2018, which failed to handle the conditions and finish last.

It leaves Waller and Godolphin  yet to name who will run in their slots, while Saturday's Schillaci Stakes winner will take the Melbourne Racing Club place in the 12-horse field.

Waller could yet have a third runner with  an announcement which horse will run in his slot is "imminent", but Yes Yes Yes would be favoured to take it.

There has never been a query over Nature Strip’s speed but there has been about his ability to run out a strong 1200m. However his Moir Stakes win, a second group 1 win in 2019, was enough for Harron.

"I think it is well deserved," Waller said. "It is good to be selected by a good judge that has a good record in the race, and it is one I feel privileged about to tell you the true."

Nature Strip and Sunlight are the only sprinters in The Everest to win twice at group 1 level in 2019. Both possess speed, which will keep dual winner Redzel honest in the first half of the race.

"I think everyone knows that he likes to roll along and he is actually settling better," Waller said. "In previous years he has been getting to the front and charging. Now he is getting the front and relaxing."

Waller has not decided on a jockey for Nature Strip but confirmed James McDonald would ride Arcadia Queen in The Everest.

It seems likely Waller will select Golden Rose runner-up Yes Yes Yes to run in his slot, while Godolphin will make a choice between Rose winner Bivouac and Alizee.

Godolphin are getting close to naming their Everest runner and Kerrin McEvoy had a suggestion for them after he worked Alizee between races at Randwick yesterday.

"There’s your Everest horse I would say," he told Godolphin's Darren Beadman after Alizee finished off her running the final 600m in 33.03 seconds.

Godolphin Australian boss Vin Cox said the decision was close with James Cummings will assess the horses before  an announcement.