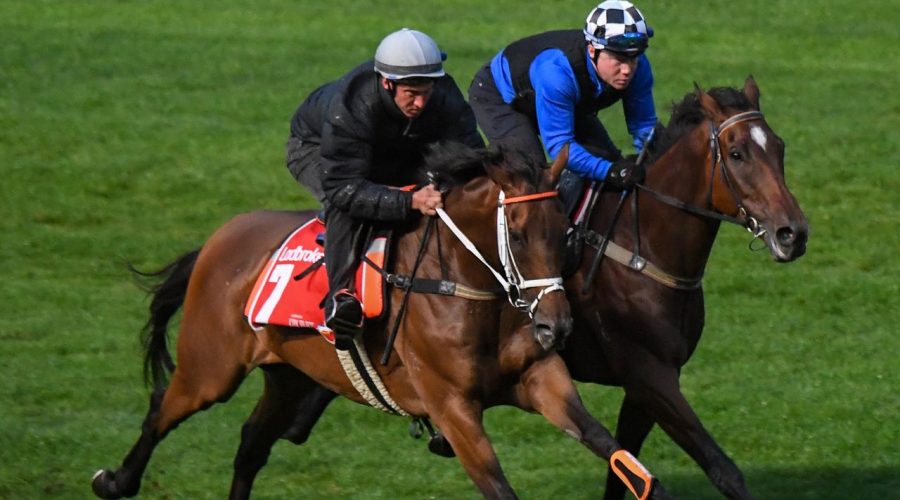 Rarely does a trainer ride another trainer’s horse in trackwork but Kris Lees was happy to have a colleague’s opinion of Mugatoo’s progress going into Saturday’s All-Star Mile.

Caulfield trainer Nick Ryan rode Mugatoo in his final lead-up gallop at The Valley on Tuesday morning. Ryan was a premiership-winning rider in Melbourne before taking up training.

“Nick rode him a fair bit at home (Caulfield) last preparation so I just thought I’d leave him on him to ride work,” Lees said.

Lees said Ryan gave him a glowing report about Mugatoo’s first appearance at The Valley since his epic fourth after racing wide throughout in the Cox Plate last October.

“He was very happy with him,” Lees said.

“He said every time he asked him to extend, he did, and he loved that ground.”

Mugatoo was the 11th horse in the final All-Star Mile voting but the import received a Racing Victoria wildcard into Saturday’s $5 million race.

While Mugatoo’s All-Star Mile berth was uncertain until last Monday, Lees was always confident the six-year-old would get a start in the $5 million event. But Lees had a back-up plan had Mugatoo missed out on a run in the rich event.

Newcastle trainer Kris Lees has Mugatoo ready for another shot at a big payday in the All-Star Mile. Photo: Mark Evans/Getty Images.Source:Getty Images

“We had alternative options but I was pretty confident he would get there one way of the other,” Lees said.

“We would have probably just put a bit more work into him and run him in the Ranvet.”

The All-Star Mile showed how far Mugatoo has come in 12 months but he said the son of Henrythenavigator was one of the best imports he had trained for long-time supporter Australian Bloodstock.

“He’s an older horse but it’s his third preparation with us but if he just stays at that level, he’s going to be a good horse for us,” Lees said.

“He won the Canberra Cup this time 12 months ago then we threw him in the deep end because of COVID and ran him in the Tancred because we didn’t know if racing was going to stop.”

Hugh Bowman will travel from Sydney to ride Mugatoo in the All-Star Mile. Mugatoo drew gate eight at Tuesday’s barrier draw, which was the same barrier from which he started in the Cox Plate.

Bookies have kept Mugatoo safe at $9 in the ‘final field’ betting on the All-Star Mile.

March 9, 2021 Horse Racing Comments Off on Mugatoo out to erase memories of tough Cox Plate trip in All-Star Mile at The Valley
NFL News