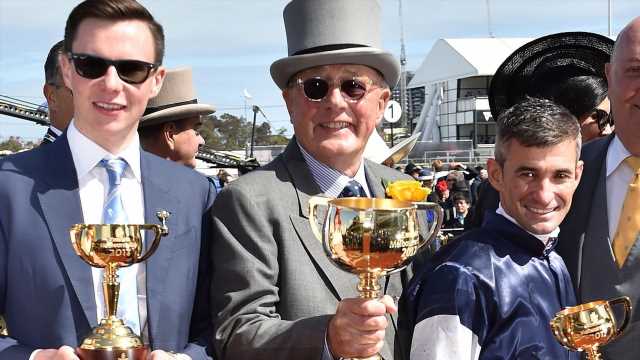 However, the powerful owner has revealed he has reservations about the Werribee training facility for the international invaders, insisting he would prefer it was based at Sandown, Ballarat or Pakenham.

Williams, who claimed the most recent of his Cups last year with Twilight Payment, gave his high-powered support to the intentions of the Melbourne Cup review which concluded with sweeping Cup changes.

He said he will be back for more Melbourne Cup glory with his tried-and-true method of bringing European imports to attack the big race.

It will be harder with a strict cap on the number of internationals allowed at Werribee and horses to face extra and more stringent medical checks before leaving home and in Australia.

But that won’t stop Williams and his Cup pursuit.

“I have been doing it longer than anyone currently, since 1986, why stop now?” Williams told the Herald Sun.

“Let’s support the authorities, they are very well intentioned. They are doing an outstanding job in protecting the industry.

“I support all the recommendations if they are practical – some (people) may not.

“They have been very well intentioned in producing the report – the future will decide the success.

“They deserve congratulations for addressing the problem.”

Williams, who collected his first Melbourne Cup trophy with Just a Dash in 1981, agreed Cup change was needed however Werribee is not his venue of choice for the internationals to be based.

The internationals were based at Sandown until 2010 when their base was shifted to Werribee – Williams would be happy to see it go back to the future.

“Werribee remains the training facility, I would not go there by choice,” Williams said.

“(They should go to somewhere like) Sandown, Ballarat, Pakenham – build a facility that can be used 52 weeks a year by the locals.”