A battling neck success in the Queen Elizabeth II Stakes for jockey Oisin Murphy and Roaring Lion stood out as the crowning achievement for John Gosden as the Newmarket trainer dominated Qipco Champions Day at Ascot.

With other wins in the Long Distance Cup courtesy of Stradivarius and a second successive win in the Champion Stakes with resurgent Cracksman, both ridden by Frankie Dettori, Gosden left the Berkshire track with almost £1.9million of the £4.5m on offer and a third trainers’ championship in the bag with his horses winning £8,240,761.76 in Britain in 2018.

With his two fillies Coronet and Lah Ti Dar second and third behind Aidan O’Brien’s Magical in the Champion Fillies & Mares’ Stakes, the results on the richest day in British racing history neatly reflected what has been a magnificent season for 67-year-old Gosden. 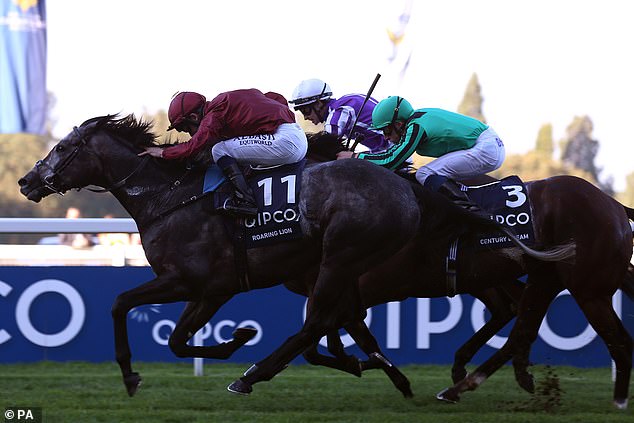 The horses in his stable include the best in Europe, dual Arc winner Enable, the most exciting two-year-old in training, unbeaten Dewhurst Stakes winner Too Darn Hot, the best stayer in Stradivarius and after his defeat of outsider I Can Fly in the QEII Stakes under an ice-cool Murphy ride, the best three-year-colt on this continent in Roaring Lion.

Victory on Saturday owed as much to the grey’s gritty tenacity as his electric talent as he overcame not only his 12 rivals but the testing ground which had caused Gosden to switch him to back to the mile contest rather than stick to the mile and a quarter of his previous three group one wins in the Champion Stakes.

The pulsating victory was played out as two of his Qatari owners, Sheik Fahad Al Thani and his brother Sheik Hamad, jumped for joy and struggled to contain their excitement sitting beside the Queen in the Royal Box. Asked what the Queen had said to him, Sheik Fahad said: ‘I think the Queen enjoyed it but I hope I was not too loud.

‘She congratulated me. She said enjoy it. She is the greatest supporter of our racing and the breeding industry.’

For the Fahad brothers it was the most memorable day since they began investing in racing. Their company, Qipco, sponsor British Champions Day and they now have a champion colt in Roaring Lion who could have one final race in the Breeders’ Cup Classic in America next month before being retired to their Newmarket stud.

But despite his attempts to deflect the glory to his owners, his staff and his jockeys, the day belonged to Gosden. Things did not go smoothly when he first returned to Britain after cutting his training teeth and building a big reputation in America. 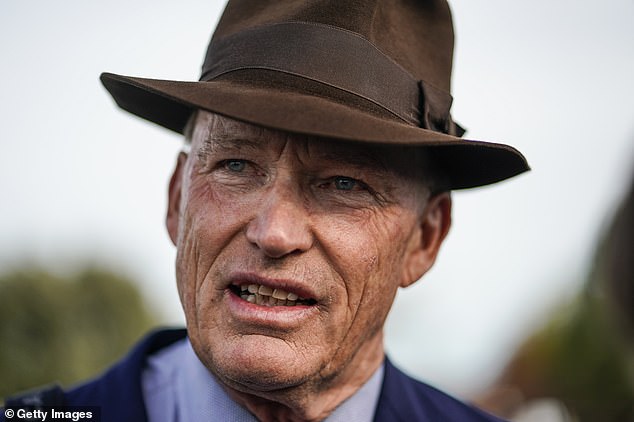 But now he is the only viable opponent to the record-breaking Irish stable of O’Brien.

On Saturday Richard Fahey, trainer of Sands of Mali, 28-1 winner of the Champion Sprint, was the only other trainer to get a look in with the group races.

Gosden nurtured the talent of Roaring Lion in the spring and early summer, never asking too many questions which may have pushed his temperament over the edge, and reignited the racing spark in Cracksman which looked all but extinguished when he was beaten at Royal Ascot in June. 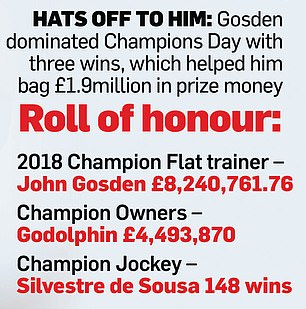 He also carefully rationed the energy of Stradivarius, whose wins in the Yorkshire Cup, Ascot Gold Cup, Goodwood Cup and Lonsdale Cup ahead of Saturday’s win not only landed owner Bjorn Nielsen a £1m bonus but represented the most impressive sequence of performance by a staying horse in 50 years.

Gosden said: ‘We are lucky we have great owners who send us lovely horses and wonderful staff who have worked for me for many years.

‘There is not individual satisfaction, it is just trying to do our best. Getting Enable back and Cracksman back to top class is very fulfilling as is seeing Stradivarius going round and round.’

Stradivarius almost didn’t go around again. Gosden revealed it had been ‘50-50’ over the colt running after he had walked the course. 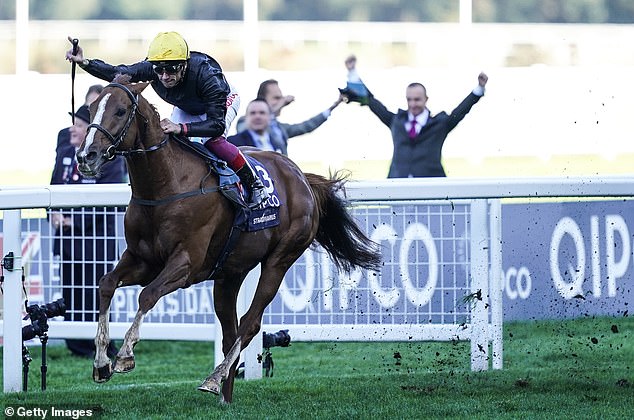 His win was in part down to an opportunistic move by Dettori, who found a run on the home turn between the running rail and Ryan Moore’s mount Flag of Honour when it looked like he might get boxed in by O’Brien’s three runners.

Gosden added: ‘Frankie saw that glimpse (of a gap) on the bend and dived for it. Ryan tried to shut it but, thank goodness, it was too late.

‘He’s a fabulous horse who did not like the ground, but what a clever ride. It was jockeyship at its highest level.’

Dettori had a more gentle conveyance on Cracksman, who followed last year’s seven-length win with a six-length success from Crystal Ocean including a lap of honour in the final furlong as he galloped into retirement.

Paying tribute to the trainer, Dettori, who picked up a three-day careless riding ban on Stradivarius, said: ‘These are not gimmes, they are proper group ones at Ascot.

‘Full credit goes to the Gosden stable and the trainer who is a genius for me. The things we have done together are amazing.’