PYLEDRIVER can make it a family celebration for trainer Willie Muir and his son-in-law Martin Dwyer, the rider of the colt, in today’s Pertemps St Leger at Doncaster. Despite Muir having yet to train a Classic winner and Dwyer admitting he believed his glory days were now behind him, PYLEDRIVER (3.35, nap) has the credentials to give this popular pair a memorable celebration. After his unfortunate run in Derby when he encountered more traffic problems than the M25 Pyledriver hosed up in the Great Voltigeur at York.

The Voltigeur has proved a significant stepping-stone for glory in the season’s oldest Classic. Last year’s Leger winner Logician completed the double.

Aidan O’Brien is hoping Santiago will reward him with a seventh victory in the race. He also runs Dawn Patrol and Mythical, but they will be acting pacemakers for Santiago, winner of the Irish Derby.

After his success in the Irish Classic Santiago came up short behind Stradivarius when finishing third in the Goodwood Cup.

On form lines with Berkshire Rocco, whom he beat at Royal Ascot, he has two lengths to find with Pyledriver.

The word from Ireland suggests O’Brien’s son Joseph has a better prospect in Galileo Chrome.

This progressive individual certainly has the stamp of a smart colt, but his overall form is nothing to shout about.

Earlier on the card CHINDIT (1.50, nb) can make it three wins on the bounce in the Bet365 Champagne Stakes. 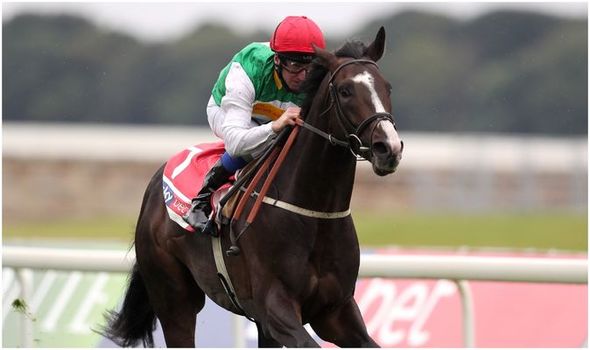 This Ascot listed winner has repeatedly had his credentials enhanced by runners that have finished behind him winning their next starts.

It will be a huge ask for DANZENO (2.25) to take the Bet365 Portland Handicap with top weight but with the capable 5lb claiming Ray Dawson in the saddle it should swing things in his favour.

This grand campaigner was unfortunate on his latest start when denied room when third behind Count D’orsay at Haydock seven days ago.

A clear run robbed ONE MASTER (3.00, treble) of victory at York last month when a fast-finishing second behind Safe Voyage. She can make amends in the Bet365 Park Stakes at the expense of Molatham.

At Chester the consistent ALIGNAK (2.05) will appreciate this lesser grade after his third in Group 3 behind Hukum at Newbury last month.

Course and distance winner BE MORE (2.40) can enjoy more success at the track by taking the Racing Together Handicap.

GHAIYYATH (4.10) can justify his label as the current best horse racing in the world by taking the Irish Champion Stakes at Leopardstown.

He stamped his authority over Magical, hoping to add to last year’s success in this race, at York last month.

There is no conceivable reason for her to turn the tables and this is backed with Ryan Moore electing to partner her stable mate Japan.

After countless defeats and excuses he appears to have lost the plot. However, Sottsass, winner of last year’s French Derby, cannot be overlooked.

But he failed to impress on his latest start when beaten by Skalleti at Deauville. Also, his best recent form has been over a longer trip.

Moore, regarded as principal rider for Aidan O’Brien, is a significant booking for the Donnacha O’Brien-trained FANCY BLUE (3.10).

The French Oaks winner can confirm her victory over Peaceful, the third home, by taking the Matron Stakes.