Trainer Joe Pride can still remember sitting in a Parramatta pub, enjoying a rare Saturday off with some beers with his mates, and laying eyes on Eduardo for the first time.

“I still remember seeing him the day he ran third in the Oakleigh Plate, it was his fifth or sixth start in a race. It was an exceptional performance: he sat three deep in a race with hot pace, Nature Strip dropped off, but he kept going,” Pride said. 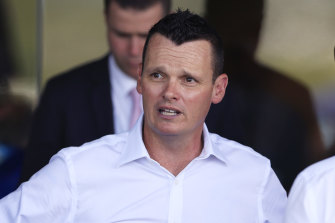 Trainer Joe Pride was in a Parramatta pub when he first watched Eduardo.Credit:Getty

“I had finished lunch with a few mates and went across the road to the pub to watch a few races. A few months passed after that race, then an owner of mine, Lyndon Galvin, said we could potentially buy this horse, so we did. I won’t say how much we bought him for.”

Eduardo was being trained in Victoria by Sarah Zschoke, who Pride has never spoken to this day. You can hardly imagine Zschoke would be doing cartwheels losing a sprinter like Eduardo, who, as of 4pm on Thursday, was third favourite for Saturday’s The Everest. Eduardo is a $6 hope in the cashed-up Randwick feature – but Pride has no doubts he should be favourite.

“He can win because he’s had the right preparation, and when you look at his form the past six months, I don’t think he’s second to anything – his form is the best form in the race, including two wins over Nature Strip and a win in The Galaxy in unbelievable fashion,” Pride said.

“He also loves the wet. I think he should be favourite. Gytrash was a hard-luck story last start [in the Premiere Stakes] but he was on the part of the track you wanted to be that day [at Randwick] on the fence. I think Nature Strip, my horse and Gytrash will fight out the finish.” 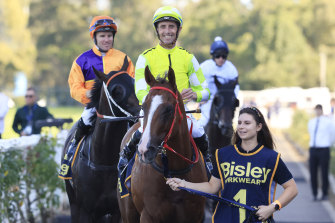 Ready to rock … Nash Rawiller and Eduardo after their win in The Galaxy.Credit:Getty

Pride, 50 next year, is used to winning majors with horses at a decent price. Terravista won his two majors at $10 and $15, as did Red Oog; Tiger Tees started $14 in the 2014 The Galaxy, while Private Eye saluted at $11 in the Epsom last week.

The trainer could not explain nor care about the starting prices, and was certainly not fussed about the yearly brouhaha about The Everest being given group 1 status.

“Everyone in the world knows about this race. Putting ‘group 1’ in front of it doesn’t make much difference,” Pride said.

What would make Eduardo’s win extra special is he is only one of three genuine carnival horses Pride has this spring. Private Eye will target the Golden Eagle while Ballistic Lover trials next Tuesday at Randwick before a return to Melbourne for the Begonia Belle Stakes (1100m) on Derby Day.

The laidback South Sydney Rabbitohs fan has been in the game 20 years, and if he had any advice for a rookie trainer, it would be “don’t start out in Sydney because it’s too tough – start somewhere else and build your way up”.

“There are easier places to learn your trade,” Pride said.

For all his success with sprinters like Eduardo, Pride pointed out his strike rate in races 2000m and longer was an impressive 25 per cent.

As for adding an Eduardo tattoo to his collection, which already includes ink of some of his group 1 winners, Pride quipped: “I’ve got them on my chest and arms. There’s room. And Eduardo is probably due. We’ll see what happens after The Everest. The tattoo parlours have been closed.”

October 14, 2021 Horse Racing Comments Off on ‘He’s not second to anything’: Pride says Eduardo should be Everest favourite
NFL News