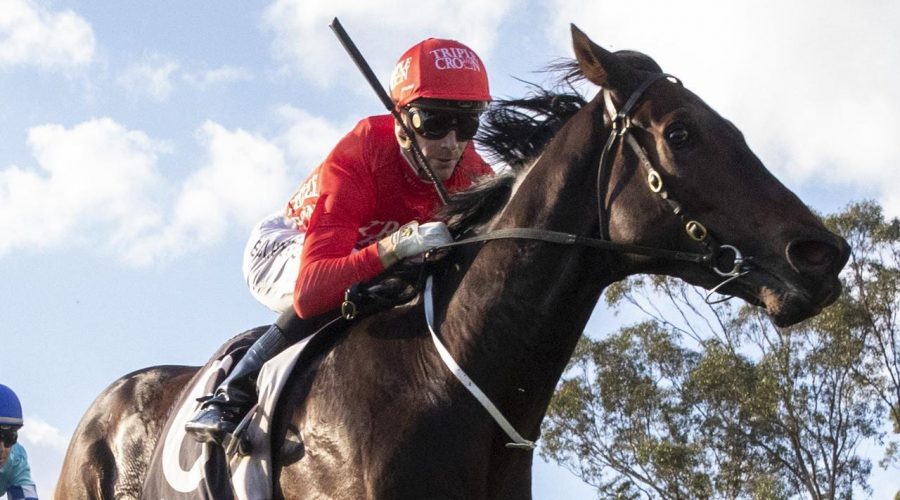 Exoboom – even the name attracts attention – had to survive a protest before confirming his star is on the rise at Hawkesbury on Saturday.

But celebrations for Exoboom’s owners and jockey Sam Clipperton for his 500th career win were put on hold momentarily as connections of third placegetter Black Duke protested alleging interference in the final 100m of the Guineas.

Keagan Latham rider of Black Duke, said his three-year-old was checked when Exoboom hung in under pressure.

“Sam’s horse can across me and I had to take evasive action,’’ Latham told Racing NSW stewards.

Black Duke’s trainer Richard Litt said his gelding “would have got very, very close’’ with a clear run.

But Clipperton gave evidence that Exoboom deserved to keep the Hawkesbury Guineas.

“We were sailing down the outside with a blistering turn of foot,’’ Clipperton said.

“We went past Keagan Latham like he was standing still, we had all the momentum and I feel we won the race fair and square.’’

Stewards agreed and quickly dismissed the protest, declaring Exoboom ($8) as the winner by a long neck from Rainbow Connection ($8.50) with Black Duke ($61) nearly a length away third.

Ellsberg started the $1.90 favourite and after settling outside the leader, Acrophobic, fought on fairly to run fourth.

“They ran along early in the middle stages which was great but to get him into clear air and keep his momentum going was important as he is such a big horse,’’ Paul Snowden said.

“I told the owners before the race he’s meeting horses that are in their niche and he is going improve when he gets to a mile. I felt if he could be competitive with these he will be cooking with gas.’’

Exoboom was having only his second run back this campaign and maintained his record of never missing a top-two finish with his third career win.

“He had a hard run the other day when he resumed here, it took a bit out of him just quietly,’’ Snowden said.

“He had a lot more muscle time, his coat has come on and things were changing. When you see those things happening quite quickly you know he’s on the right track.’’

Clipperton described Exoboom as a big, raw customer who has plenty of ability.

“He can do a few things wrong but today he didn’t put a foot wrong,’’ Clipperton said.

“He jumped nice and I was able to just tuck in behind them. He travelled really well and switched off as soon as I got cover.

“He could have won a bit easier than that, he was having a good look around and doesn’t really know how to execute that killer punch yet but when the penny drops for this horse he could be a serious animal because he’s got some serious ability.

“I actually rode my first Group Two winner (Exosphere) on his father. I’m getting old. The similarities there are quite uncanny.

“His sire Exosphere was such a huge horse, very raw, and he’s very much the same so hopefully he can follow in his father’s footsteps.’’

Rainbow Connection burst through near the inside and looked likely to win only for Exoboom too strongly.

Trainer Matthew Dunn said Rainbow Connection “ended up on the worst side of the track, it was probably not quite as good as the middle”.

“But he has run very well and he’s a really nice horse who has come a long way in his first race preparation,’’ Dunn said.

“I think we will stop him now. He did want to get in a bit under pressure to day ad he hasn’t done that before so that might be the sign he is coming to the end of it.

“Who knows where he can get to in the spring, he might be a Golden Eagle horse.’’

May 1, 2021 Horse Racing Comments Off on Hawkesbury Guineas: Exoboom survives protest to bounce back to winning form
NFL News