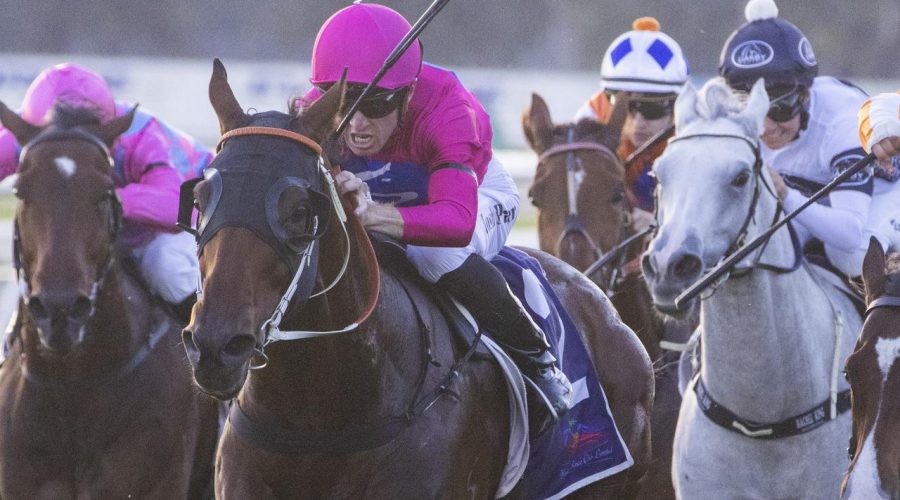 In an exciting finish, Archedemus rallied to edge out favourite Royal Celebration in the Group 3 $200,000 Hawkesbury Gold Cup (1600m) on Saturday.

John Hawkes, who trains in partnership with sons Michael and Wayne, said Archedemus showed admirable determination to win as he was under siege from the turn.

“This horse has been going well and was in his right race today.

“We have had him for a couple of preparations, we won a $1 million race (The Gong) with him and now this Group 3 race so he’s been a good horse for his owner, Ross Williams, and our stable.’’

Archedemus ($5) scored by a long-neck from Royal Celebration ($3 favourite) with Purple Sector ($7.50) nearly three lengths away third before nearly 6000 fans who made enough noise for a crowd double the size.

For the Hawkes stable, Archedemus was its fourth Hawkesbury Gold Cup winner in seven years after Amangiri (2020), Kingsguard (2018) and Leebaz (2014).

The stable has had considerable success at this meeting over the years including the 2015 Hawkesbury Guineas champion Chautauqua.

“This is a race meeting we target if we find the right horse and it’s nice when you can get the win,’’ Hawkes said.

“We have had a good season, we were a bit stiff in a couple of big ones but overall we are pretty happy with our results.

“It’s also nice to get this win for Archedemus’s owner, Ross Williams. He puts a lot of money into this sport and deserves the success that comes his way.’’

Archedemus scored his second win in the Hawkesbury Gold Cup — he also won in 2019 when trained by Gwenda Markwell.

Hawkes said a race such as the Listed $200,000 Scone Cup (1600m) at Scone on May 14 would seem a logical target for Archedemus but the trainer fears the gelding will be weighted out of that race.

“I don’t think there is a lot for him in the next few weeks,’’ Hawkes said.

“He will probably get too much weight in the Scone Cup so we might even pull him up.

“I think the mile is his best distance and there are not that many races for him in Brisbane but we will have a look at the options.’’

Archedemus, who has won nine of 24 starts with more than $1.5 million in prizemoney, earned the praise of winning rider, Parr.

“He had the same set-up today he had going into The Gong so that filled me with confidence,’’ Parr said.

“When I saw him before the race, I was even more confident because he paraded so well. He is a very difficult horse to ride, he is a lot stronger than me. But he stuck his head out and he was up for the battle.’’

Parr and the other Hawkesbury Gold Cup riders wore a black armband to honour the memory of jockey David Pisani who died on Anzac Day. He was only 38.

“We are all wearing the black armbands for David Pisani, so thoughts to his family and friends,’’ Parr said.

“It is terribly sad that someone could get to that sort of place.’’

Jockey Sam Clipperton was coming off his Hawkesbury Guineas win on Exoboom and looked likely to land the Group 3 double as he gave the favourite Royal Celebration the run of the race.

Royal Celebration loomed up to win but, try as he might, he could not get past the determined Archedemus.

“But you can’t take anything away from the winner, he is a bloody good horse.’’

The big move for Sweet Deal paid dividends in the Killahy Equine Hawkesbury Crown (1300m). Opening the day at $3.80, the John Thompson-trained mare was crunched into $2.80 equal favourite with Athiri.

The pair dominated the hold in the race and were responsible for 61 per cent of the total investment. Air To Air, which finished third, ran up to the support after being $14 on Wednesday and jumping an $8 chance. Of the rest, Wandabaa ($4.60-$8) blew significantly.

There was good money all day suggesting Embracer would run a strong race in the Hawkesbury XXXX Gold Rush (1100m). The gelding was backed from $5-$4.40 on the day and went around as the most popular runner in terms of money taken.

Favourite backers were reeling when the heavily tried Ellsberg was knocked off in the Hawkesbury Guineas (1400m). Hammered from even money this morning into as low as $1.80 before starting $1.95, Ellsberg held more than half the total investment on the race and had a stack of multis riding on his back. In fact, he was four times as popular as the equal second pick in the market, Aim ($8).

Exoboom ($6-$8) had been specked earlier in the week but was mainly a drifter today thanks to the big money for the favourite.

Archedemus was pretty solid most of the day in the lead-up to the running of the Hawkesbury Gold Cup (1600m). The Team Hawkes-trained galloper opened the day at $5.50 and jumped at $5 and although coming in for some support, went around as the fourth most popular runner behind Royal Celebration, Greysful Glamour and Purple Sector.

Royal Celebration ($2.90-$3) was the best go in the race, which started earlier in the week when $4.60 was available. He held over four times the money that the winner carried. Of the others, Looks Like Elvis was a big firmer after being $11 in the morning. He jumped at less than half that quote and went around a $4.80 second favourite.

Originally published asArchedemus gets the Gold to spoil the party