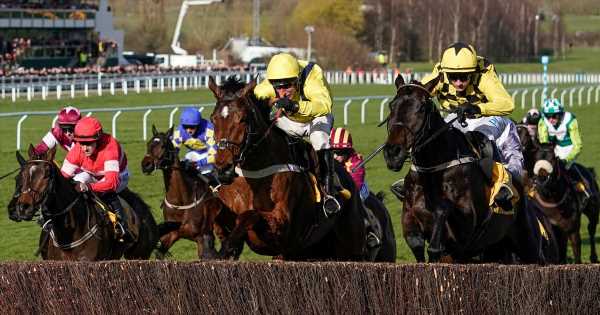 Al Boum Photo will face 11 rivals as he bids to enter the Cheltenham Gold Cup history books with a third triumph.

The Willie Mullins-trained chaser would join the likes of Cottage Rake, Arkle and Best Mate with victory in the WellChild-sponsored feature on March 19.

His main rival in the betting is the Nicky Henderson-trained Champ, second over a shorter trip on his comeback this season.

A thrilling winner of the RSA at last year's meeting, he faces the runner-up Minella Indo, who jockey Rachael Blackmore has bypassed the chance to ride in favour of A Plus Tard.

Bryony Frost joins her in their bid to become the first female rider to win the race, as she takes the reins on Frodon.

The last novice won in 2015 and Royale Pagaille is in that category.

Al Boum Photo's trainer Willie Mullins also runs Kemboy with his nephew Danny aboard – and they will aim to follow up their Irish Gold Cup triumph.

Al Boum Photo is the horse to beat, having successfully completed his usual preparation run at Tramore. However, new opponent A Plus Tard can deliver for Rachael Blackmore, in her bid to become the first female rider to win the race. The seven-year-old has Festival form and stayed on well to win the Savills Chase over Christmas, off a decent gallop. He's the up and coming horse in the field – and can follow up Honeysuckle's Unibet Champion Hurdle heroics for Blackmore and trainer Henry de Bromhead.

*Odds correct at the time of publication, subject to change. 18+ | Gamble responsibly | begambleaware.org