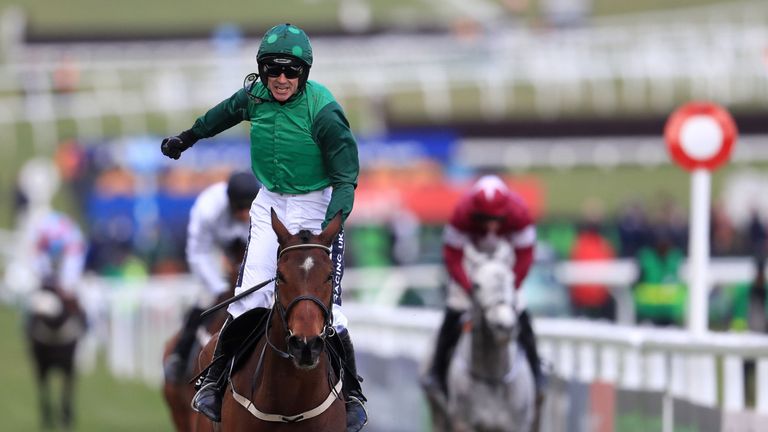 Footpad puts his unbeaten record over fences and huge reputation on the line in the Poplar Square Chase at Naas on Saturday.

The Willie Mullins-trained six-year-old competed with credit at the very highest level over hurdles, but has already surpassed those achievements since having his attentions turned to the larger obstacles.

Footpad won each of his five starts as a novice over fences last season, including a stunning display in the Arkle Trophy at Cheltenham.

He will be a red-hot favourite to see off four rivals on his seasonal reappearance in this weekend’s two-mile Grade Three, and Mullins is looking forward to his return.

Mullins said: “Footpad seems to be well. He schooled well and he worked very well during the week, so we look forward to starting him off.

“The Poplar Square Chase is a nice type of race for him, and it’s nice to get him out and back on the track.

“A second-season novice race like this is a lovely starting point.”

Footpad is a general 7-2 second-favourite for this season’s Queen Mother Champion Chase behind Altior.

He is 7-1 favourite for the Ryanair Chase, and is even as short as 10-1 for the Cheltenham Gold Cup.

The five-year-old was seriously impressive on his first three starts for Harry Whittington last term, landing successive handicaps at Newbury before dominating three opponents in the Kingmaker Novices’ Chase at Warwick.

He was a disappointing fourth behind Footpad in the Arkle, but Whittington believes his charge is much closer to the finished article this season.

“He travelled over on Thursday and had a very good trip. He had a little leg stretch this morning, and all the reports are very good. He’s fresh and well, and we’re looking forward to it,” said the Wantage-based trainer.

“At the end of the day, what we’ve been looking for is some cut in the ground. We were aiming at the Haldon Gold Cup, but that wasn’t to be because the rain came too late. We saw this race, the conditions suit him very well, and then ‘Mr Footpad’ turns up!

“We need to get our horse started. The Arkle didn’t go to plan, but he’s a lot stronger horse now than he was then.

“I hope he has a clear round and runs a nice race to set him up for a good season.”

November 9, 2018 Horse Racing Comments Off on Footpad out to launch campaign
NFL News