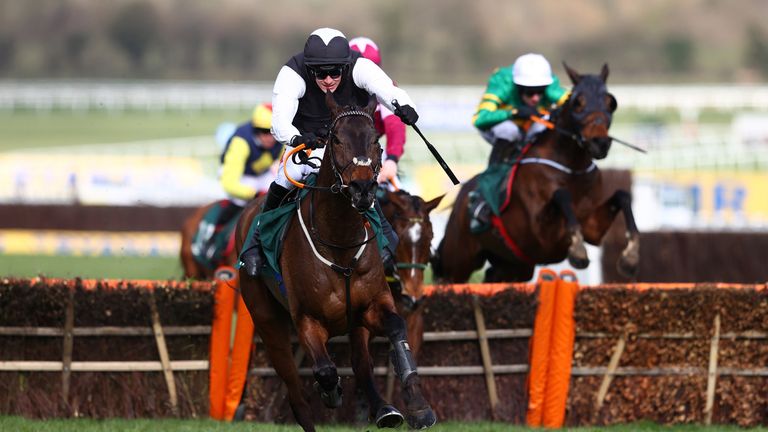 Cheltenham hero Flooring Porter bids to follow up in the Ladbrokes Champion Stayers Hurdle at Punchestown.

It is remarkable to think the six-year-old was rated in the low 120s this time last year, since when he has made huge strides.

A runaway handicap success at Navan was followed by a surprise Grade One victory at Leopardstown over Christmas, but he proved that was no fluke with an excellent front-running display in the Stayers’ Hurdle at the Cheltenham Festival last month.

Cromwell is keeping his fingers crossed Flooring Porter’s latest big-race assignment does not prove one too many on Thursday as he faces his seventh outing since racing resumed in July.

“He’s come out of Cheltenham well,” said the Meath-based trainer.

“He had a hard race there – he wears his heart on his sleeve. But he seems to have freshened up well, and we’re happy with him.

“For all of these horses, it’s been a long season. They may seem well at home, but you don’t really know till you go there.”

Cromwell’s stable jockey Jonathan Moore missed the ride at Cheltenham after standing himself down on the morning of the race.

Danny Mullins played the role of super-sub in the Cotswolds, but Moore will be back on board this week.

Cromwell added: “He had a winner last week, so he’ll be riding him.

“It would be great for him (Moore) if he could win, absolutely.”

Flooring Porter is reopposed by several horses who finished behind him at Cheltenham, including Noel Meade’s fourth home Beacon Edge and the fifth The Storyteller, trained by Denise Foster.

The Storyteller is one of two runners for the Cullentra team – along with Fury Road, who disappointed at Prestbury Park.

Of The Storyteller, Foster said: “He is a great favourite in the yard and he’s such a lovely, versatile horse as he has shown throughout this season.

“He has run some great races at Grade One level and he’s such an honest horse as he always turns up and gives his all.”

Heaven Help Us and Mrs Milner step up in class after sealing popular wins in handicap company at Cheltenham.

Hennessy said: “We’re going to give it a go, and the trip swayed us to running in this race more than anything else. She’s been in great form since Cheltenham – she came out of the race in tremendous form, and there’s not a bother on her.

“I know it’s a big step up, but we’ve long been living in bonus territory with this mare, and it’s great to be involved and have the opportunity to compete at this level.”

Nolan is similarly aware of the task facing Mrs Milner.

He said: “It’s a very competitive race and a big step up for her. But we were absolutely thrilled with the win at Cheltenham, and she doesn’t owe us anything.

“She seems in good form, and we’re hoping for a respectable run as she’s nearly always given us before. She always runs a creditable race and seems to be a mare that is improving.”

Ronald Pump is a fascinating contender for Matthew Smith. Runner-up in the Stayers’ Hurdle at Cheltenham last year, the eight-year-old has been off the track since pushing brilliant mare Honeysuckle all the way in the Hatton’s Grace at Fairyhouse.

Explaining his stable star’s absence, Smith said: “He missed Christmas with a stone bruise and then he had a splint bothering him before Cheltenham.

“He got over that, and everything was going well then until he overreached when he was cantering about a week and a half ago. He was lame for a couple of days, which meant he missed a piece of work he probably would have badly needed.

“He could come on for the run on Thursday, but we’ll be glad to get him out. Whether he’s a piece of work or two short, we’ll find out.

“Things haven’t been straightforward since the Hatton’s Grace, but these things happen with horses.

“We’ll run on Thursday – and if everything goes well and he comes out of it well, we have the option of taking him to France.”

Willie Mullins saddles Stayers’ Hurdle seventh Bacardys and the long-absent Klassical Dream, as well as Saldier and James Du Berlais, who both step up in distance after failing to figure in the Champion Hurdle at Cheltenham.