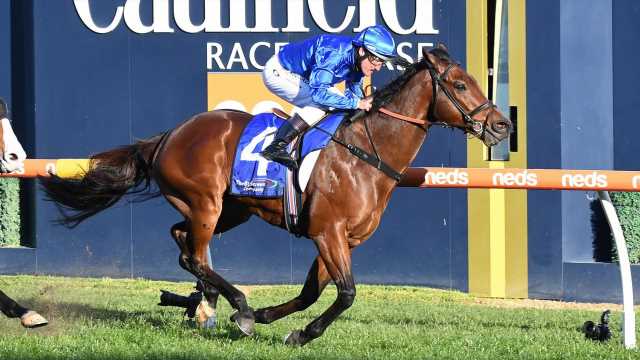 DUAL Group 1 winner Streets of Avalon headlines a healthy list of 21 nominations for the Group 3 Bletchingly Stakes (1200m) at Caulfield on Saturday.

Last year’s winner Viridine has also been nominated along with his James Cummings-trained stablemate Isaurian.

Monash Stakes winner and former West Australian Red Can Man will line-up and start one of the favourites.

Last start Sunshine Coast winner King Of Hastings is also expected to take his place for Anthony and Sam Freedman.

The promising Nick Ryan-trained Regardsmaree is set for a first-up tilt at the Group 3 contest.

Quality three-year-old fillies La Mexicana and Zou Dancer are among the nominations for the weight-for-age contest but they have also been nominated for other races on the program.

The in-form Corstens-trained The Astrologist will run in either the Bletchingly Stakes or a 1400m open handicap.

Weights for the race will be released after 4pm on Monday. A maximum field of 16 can run.

The track on Monday was rated a Soft 6.

Weather wise for Melbourne, scattered rain is forecast throughout the week, including up to 15mm on Tuesday.

Between 1mm and 3mm of rain is forecast for Friday and 4mm to 8mm on Saturday.

The final field and barrier draw will be finalised on Wednesday morning.

Nine races are scheduled for the program.