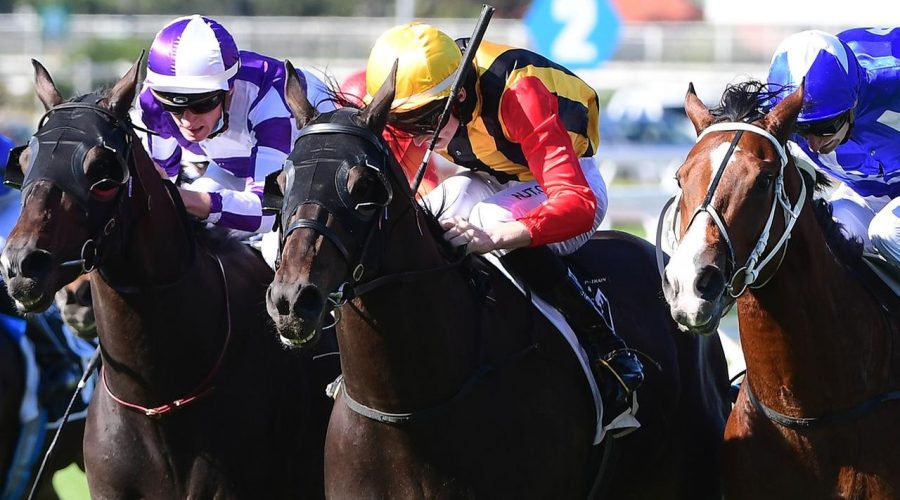 It took more than 900 days but one-time Magic Millions Guineas champion Boomsara is a winner again after finally landing a blow at Eagle Farm on Saturday.

The difficult speedster had become somewhat of a labour of love for trainer Chris Munce but he sensed something was different this time around while preparing for Saturday’s Open Handicap.

With more than $1.7m in the bank, Boomsara had hardly been a drag for connections but the days without a win were beginning to build up.

With the monkey now off his back, Munce is hoping Boomsara can follow in the footsteps of others before him.

“He has been a terrific horse for the owners,” Munce said.

“If you look back through history, there has been a lot of horses where in the early days they win big races and a lot of prizemoney then they go of the boil for whatever reason through no fault of anybody.

“Sometimes they just lack that confidence or passion but I could tell this time around he was a bit different.

“Peter Strong who rides him every morning was saying he was a different horse, he was back to normal to what he was when he won the Guineas. It is a good thrill for him to be able to win today, it means a lot.”

Close go in the 4th from Eagle Farm!

Just holding out the Chris Waller-trained Matowi in the finish, jockey Justin Huxtable was forced to defend the victory in the stewards’ room after Luke Dittman lodged a protest against the result.

In what could be the quickest decision in recent history, stewards deliberated for less than 30 seconds before dismissing the protest and fined Dittman $200 for lodging a frivolous protest.

“It happened at a vital point in the race, just as I was about to get past him,” Dittman told stewards.

“They touched, I know it wasn’t heavy but it forced me to stop, straighten my mount and pull the stick through, it brought me out another horse or so.

“There’s not much in the photo and I think if I was afforded the opportunity to ride my mount out fully, I don’t have to stop, straighten and pull the stick through, I think I make up the margin and then some.”

The win also marked Huxtable’s final win of his apprenticeship and will now become a full-fledged senior rider after outriding his claim.

“It is good that Justin is able to outride his claim on him today, it is great he can do it on one of mine,” Munce said.

“He is a tall boy but he does a good job with his weight, don’t worry because he will ride plenty of winners.”

Barista serves up double for Marshall

Taylor Marshall continued a hot streak of form with a double at Eagle Farm on Saturday, booting home winners for Richard and Michael Freedman and Rex Lipp.

Fresh on the back of Listed Glasshouse Handicap victory on Sunday, Marshall put his best foot forward again as he looks to assert his authority in the Brisbane jockeys’ room.

Marshall knows full well the trouble local riders encounter during the winter carnival but being able to land a swag of winners once the southern jockeys return home is something he takes great satisfaction in.

“It is very hard for the locals over the carnival for obvious reasons so to be able to kick a few goals off the back of that and stamp your authority on the metro stage is really satisfying,” he said.

“I am having a really good run, it helps getting support off these high-profile trainers like the Freedman’s and then I hadn’t done a lot of riding for Rex but he has a small but quality stable of horses. It’s terrific to ride a double, especially on a metro Saturday.”

Marshall kicked off his day with victory aboard $10 chance Cinderella for the Freedman brothers before booting home Bad Barista for Lipp after some late interest in betting.

Rated a $12 chance, Marshall was patient aboard Bad Barista before producing a run down the outside to knock off the Kris Lees-trained favourite Triple Ace.

“I haven’t done a lot of riding for Rex but it was nice to today. He was a little bit bullish today about the filly,” he said.

“He said keep her collected, ride neutrally and let’s see if we can have the last crack at them, to her credit she stuck the nose out when it counted.

“The weights make a difference on the firmer surfaces to be able to sprint off the back of a moderate tempo, it adds merit to her win.

“It was a muddily run race but I was able to get the suck and peel out when I wanted to.”

It comes as gun apprentice Kyle Wilson-Taylor copped a nine-day suspension for his ride on Cinquedea.

The Toowoomba-based jockey only returned from a six-week suspension earlier in the week and now faces more time on the sidelines after pleading guilty to careless riding in what was his second Saturday metropolitan meeting.

July 17, 2021 Horse Racing Comments Off on Eagle Farm: Boomsara has his confidence back after ending 900-day drought in nailbiting finish
NFL News