Frankie Dettori has warned that the scale of the challenge facing Enable in Saturday’s $4million Breeders’ Cup Turf should not be underestimated despite her short odds.

The John Gosden-trained filly, who landed her second Prix de l’Arc de Triomphe at Longchamp last month, is the 4-7 favourite with Coral and faces a line-up dominated by European rivals she has beaten before.

But no horse has ever landed the Arc and a race at the Breeders’ Cup in the same season and the list of eight horses who tried and failed include the brilliant Dancing Brave, like Enable bred and owned by Khaled Abdullah. 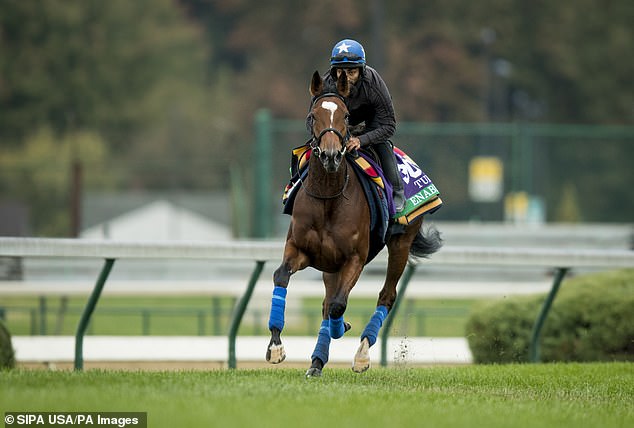 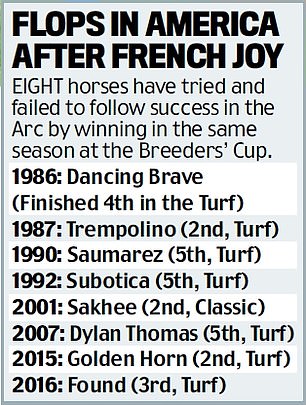 Two of the eight to miss out were ridden by Dettori — Sakhee in 2001 and the Italian’s 2015 Derby and Arc partner Golden Horn.

An injury-disrupted season means Enable is a relatively fresh horse, but Dettori is still wary and the rain that dumped on Churchill Downs for most of Wednesday and Thursday has complicated the equation further.

Dettori, the most successful European jockey at the Breeders’ Cup with 12 wins, said: ‘We are trying to make history but I have failed twice before. Hopefully it will be third time lucky but it is hard to do. I know she has only had two races this season but the Arc takes a lot out of horses. You have to bear that in mind.

‘She does not mind soft ground. It was heavy when she won the King George so we know she goes on it. I can’t wait and I am excited but it is a tall order.’

The ground does dry quickly on this sand-based circuit but one of Gosden’s concerns is that by the time the Turf is run, four races will have taken place today on the Churchill Downs grass, making it rough and inconsistent.

While Enable’s draw in stall two near the inside rail might seem a position for a filly who breaks well and races positively, here too there are complications.

The cambered tracks means water drains to the inside rail, potentially leaving it softer. That was a factor when Golden Horn rolled to the inside and floundered in the final strides when nailed by Aidan O’Brien’s Found the year the Breeders’ Cup was run at Keeneland. What cannot be denied is that Enable has looked magnificent this week and been the star attraction here.

Her rivals include Andre Fabre’s 2017 Turf winner Talismanic and his Arc fourth Waldgeist but, with no standout US opponent, it could be O’Brien’s Magical who is the biggest threat.

She has also had an injury- disrupted season and her 10th place in the Arc was little more than a warm-up for victory in the Group One Fillies & Mares Stakes at Ascot last month. There is confidence in the O’Brien camp that Magical will run a big race.

O’Brien also talked positively about Mendelssohn for the $6m Classic, after giving the Ryan Moore-ridden colt a series of dirt run preparations. Both he and Saeed Bin Suroor’s Dubai World Cup winner Thunder Snow will be better equipped for the challenge than Gosden’s Roaring Lion.

With US Triple Crown winner Justify retired and favourite Accelerate drawn out wide, the crown looks up for grabs but if Mendelssohn can overturn a four-length defeat by Catholic Boy in the Travers Stakes at Saratoga in August it will go down as a stand-out training achievement in the star-studded career of O’Brien.